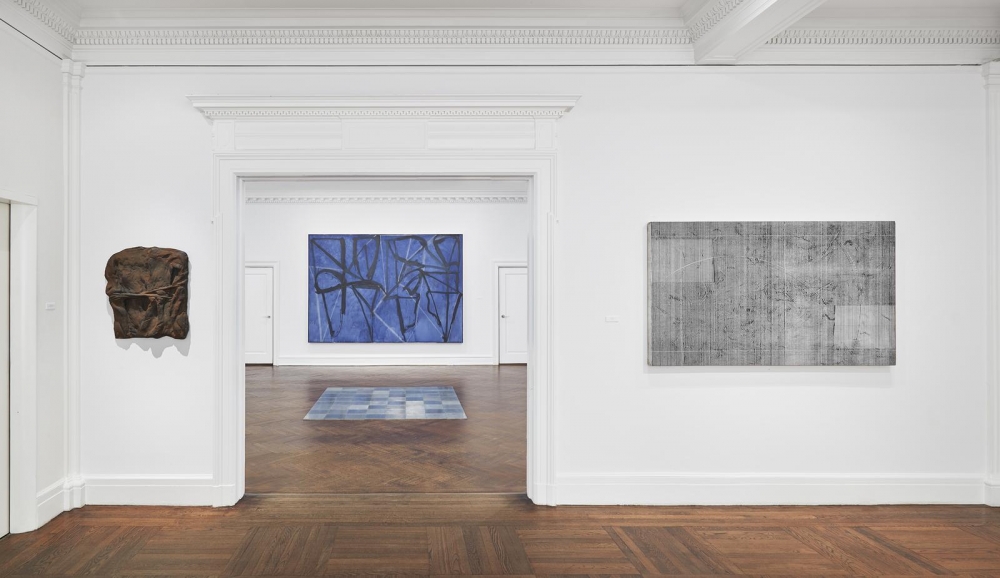 Mnuchin Gallery opened its fall season with Minimalism & Beyond, an exhibition exploring Minimalism and its legacy in contemporary art from the second half of the twentieth century through the present day. On view through October 18, 2017, it is accompanied by a fully illustrated catalogue authored by Pac Pobric.

The exhibition presents Minimalist masterworks of the 1960s alongside painting and sculpture of the following decades that both elaborate upon and disrupt Minimalism’s formal language to a diverse range of ends, from the playful and the personal to the subversive and the political. Taking as its starting point iconic works by Carl Andre, Dan Flavin, Donald Judd, Agnes Martin, Robert Ryman, and Frank Stella, the exhibition continues with Postminimalist figures such as Eva Hesse, Robert Morris, On Kawara, and Bruce Nauman. It carries on with works from the 1980s and 90s by artists including Robert Gober, Felix Gonzalez-Torres, David Hammons, Jeff Koons, Cady Noland, and Christopher Wool. The exhibition culminates with contemporary examples by Carol Bove, Wade Guyton, Rashid Johnson, Glenn Ligon, and Rudolf Stingel, artists who employ the supposedly "neutral" aesthetic tropes of Minimalism to explore the politics of race, class, and technology.

At its outset Minimalism arose as a reaction to the exuberant individualism of Abstract Expressionism, turning away from its manifestation of the psychological state of the artist. Early practitioners retained the abstract component of their predecessor’s work while using basic geometric forms to hone in on the characteristics of the medium. Donald Judd’s idea of the Specific Object, neither painting nor sculpture, encompassed Minimalism’s attempt to reduce artworks to their unique essence. Rejecting any attempts to find narrative meaning in his work, Frank Stella famously told Bruce Glaser in 1966, “What you see is what you see,” coining a phrase which became a framework for understanding early Minimalist art.1 Stella strove for an abstraction predicated on the nature of paintings. In Creede I and Creede II, both 1961, Stella’s signature bands replicate the shape created by the canvas on its stretcher while emphasizing its flatness.

Moving into the 1980s artists continued to explore Minimalist ideas about specificity and economy of form, but pared down their work with the intent of maximizing suggested meaning rather than removing it. The seemingly effortless suspension of basketballs in Jeff Koons’ Two Ball Total Equilibrium Tank (Spalding Dr. J Silver Series, 1985) belies the complex calibration that keeps them afloat. The basketballs symbolize the spectacle of professional athletics, the elusive dream of court stardom that inspires monumental determination and struggle for so many only to be achieved by a small few. On Kawara’s monochromatic date paintings each record a discrete unit of time, the day they were created. Evoking at once the universal drumbeat of time marching on and the personal temporality of the quotidian, the formal austerity of each painting elucidates, rather than eliminates, the possibilities beyond it.

By the beginning of the 21st century, artists had broken open Minimalist techniques in service of questioning the societal structures and cultural tropes that define our time. Glenn Ligon’s Untitled (Stranger in the Village #17), 2000 is printed with text from James Baldwin’s essay “Stranger in the Village” about being the first African American to visit a Swiss town. The overwhelming darkness of the painting renders the text barely legible, a metaphor for the racial dynamics of visibility/invisibility and the capacity of language to address these dynamics. Rudolf Stingel’s Untitled, 2004 considers the classic dichotomy between “decorative” and “fine” art. Its opulent gold sheen and decadent pattern play into perceptions of art world excess and the ever-increasing threshold of record auction prices.

The elimination of the artist’s hand that began in the 1960s comes full circle with Wade Guyton, who replaces human touch with that of a machine. For his fire paintings, as in Untitled, 2006, Guyton uses an inkjet printer to “paint” a found image on linen, sublimating his control within the variability of technological error. Guyton highlights the narrowing interface between traditional image-making and the growing insertion of digital devices and languages into every facet of life. Neither “painting” nor sculpture, Guyton proves the persistent relevance of Judd’s Specific Object, foreshadowing its applicability to the future of art-making as the digital hand becomes inseparable from the human.

artdaily
Back To Top