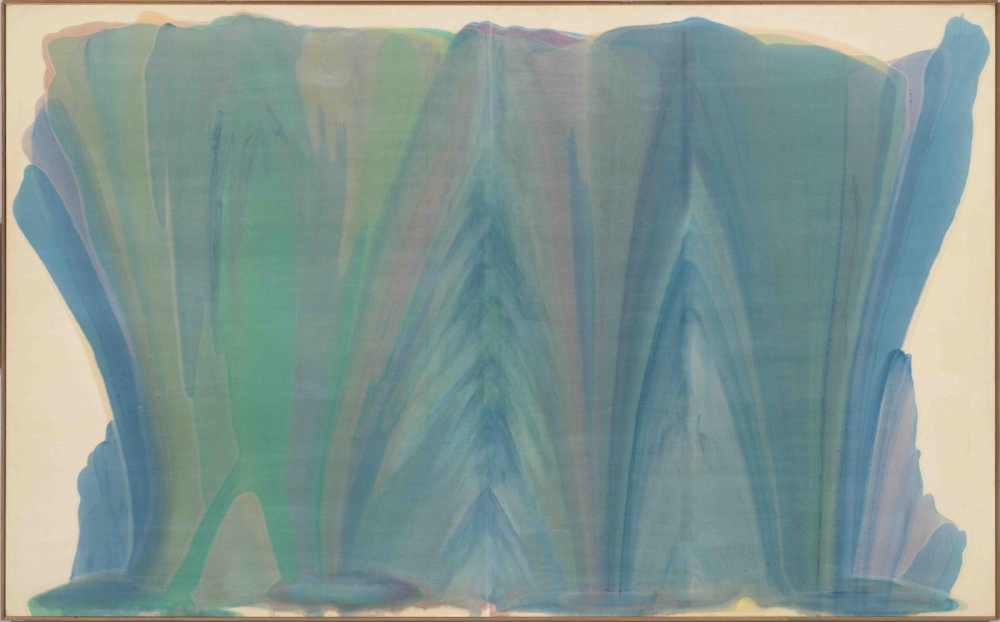 When people think of Morris Louis’s Veils, they often think of the popular painting Tet, 1958, and for good reason. Tet, which resides in the collection at the Whitney Museum of American Art in New York, is a gorgeous thing. Its delicate rivulets of paint recall Hellenistic drapery. Its exuberant gush of blues traffics in pleasures akin to those of Niagara. But this exhibition at Mnuchin Gallery, in which Tet joins eight other Veils taken from private collections, reveals the Whitney’s painting to be more exception than rule. As it should: In general, the Veils are dark, weird, and more interesting than the frilly gratifications of Tet might suggest. That Mnuchin conveyed the full gamut of the series’ peculiarities with just nine paintings is no small achievement. Louis produced nearly one hundred and thirty of them (more, if you count a similar series of works that Louis had made four years earlier). But by intelligently juxtaposing well-selected paintings (some of which hadn’t been exhibited or even reproduced in decades), the exhibition captured many of the Veils’ most remarkable, and frequently neglected, features.

And that’s important, because the Veil paintings have suffered in the past, when art historians have held the aesthetic appeal of works like Tet against the whole group and have treated all of the Veils as unproblematic exemplars of modernist formalism’s preoccupations with flatness, opticality, and, above all, elevated taste. When, in her landmark rereading of modernism The Optical Unconscious (1993), art historian Rosalind Krauss argued that formalist abstraction had repressed Jackson Pollock’s excremental drips and sublimated them into the realms of the optical and aesthetic, she used one of Louis’s Veils (the fiery Saraband, 1959) to illustrate her point.

Most of the paintings at Mnuchin could not be similarly recruited. Tzadik and Curtain (both 1958, and helpfully installed next to each other at Mnuchin) are downright spooky, conjuring in an exaggerated mood that exceeds good modernist manners. Surrounded by just a narrow margin of bare canvas at the top and sides, the central motifs of such paintings crowd the surface and loom. They seem to emerge from a primordial ooze, threads of viscous material dropping from their flanks. This isn’t a Modernist Victory of the Optical, it’s Cold War Horror-Movie Drama, and it’s pretty awesome.

Which isn’t to say that these paintings are completely anti-aesthetic, or that they don’t do modernist things like interrogate painting as a medium—they certainly do—it’s just that they end up asking questions that don’t really fit into the Greenbergian formalism with which they are customarily associated. Consider Clement Greenberg’s remarks about Louis in a 1960 issue of Art International, where the critic described Louis’s staining procedure primarily as a form of truth telling: Staining made the canvas visible through the paint, he said, for the “eye to sense the threadedness and wovenness of the fabric underneath.” But “‘underneath’ is the wrong word,” he continued. “The fabric, being soaked in paint rather than merely covered by it, becomes paint in itself, color in itself, like a dyed cloth. . . . The effect conveys a sense not only of color as somehow disembodied, and therefore more purely optical, but also of color as a thing that opens and expands the picture plane.”

This description endorses a view of painting as the medium that aims to reveal all. Unlike sculpture, painting makes everything visible from one vantage point. With Louis, paint no longer even hides the canvas. But, as many of the canvases at Mnuchin demonstrate, Louis’s paintings actually play with strategies of concealment all the time. In the center of Italian Veil, 1960, a grim wall of dark paint obstructs our view of another, more colorful composition that we can only deduce from the traces of prismatic color peeking out over the top—lucid blues, chipper yellows, and sherbet oranges to which we will never have full access. Then there are the canvases such as Dawn, 1958–59, and Beth Samach, 1958 (exhibited across from each other, and in the same room as Italian Veil, no less), in which lines from Louis’s working stretcher bars appear; the two verticals in the near center and on the right of each painting index the wooden supports on which Louis stretched the canvas when he poured his paint on the front. These vertical impressions from the back significantly impacted the frontal composition, steering the paint at times, interrupting it at others. In fact, the verticals are even shifted slightly to the left in Dawn, so it appears that Louis occasionally chose to exploit those verticals compositionally, using them to investigate symmetry and balance in a manner reminiscent of Barnett Newman’s Cathedra of 1951. More important, however, is that they also emphasize the part of the canvas that is almost never open to the viewer—the verso, the discreet and undisclosed surface behind every painting, the part that always defies optical possession. These paintings may reveal a bit about their backs, but mostly as a kind of tease, to remind us that they have something that we will never see.

For an artist like Louis who was famously secretive (he never let anyone witness how he made these works), these verticals also offer tantalizing glimpses into his backstage activity, inviting us to imagine the painter’s process, but in a manner akin to a magician who performs his act behind a lighted screen. And even after conservation research has revealed many of his secrets, those verticals continue to lure viewers. Such staging of the artist’s secret alchemical powers may fetishize Louis’s persona too much for contemporary tastes. But that theatrical play enlivened these canvases, especially since it was conducted in the often stultifying domain of post-painterly abstraction. It continues to give the Veils a dark energy with which they might break free of the optical confinements that Greenberg’s reading has enforced. And if they finally succeed in breaking free, they will be roaming the halls of art history searching for eyes more willing to enjoy their sultry drama. Watch out.

Sarah K. Rich is an associate professor of art history at the Pennsylvania State University.