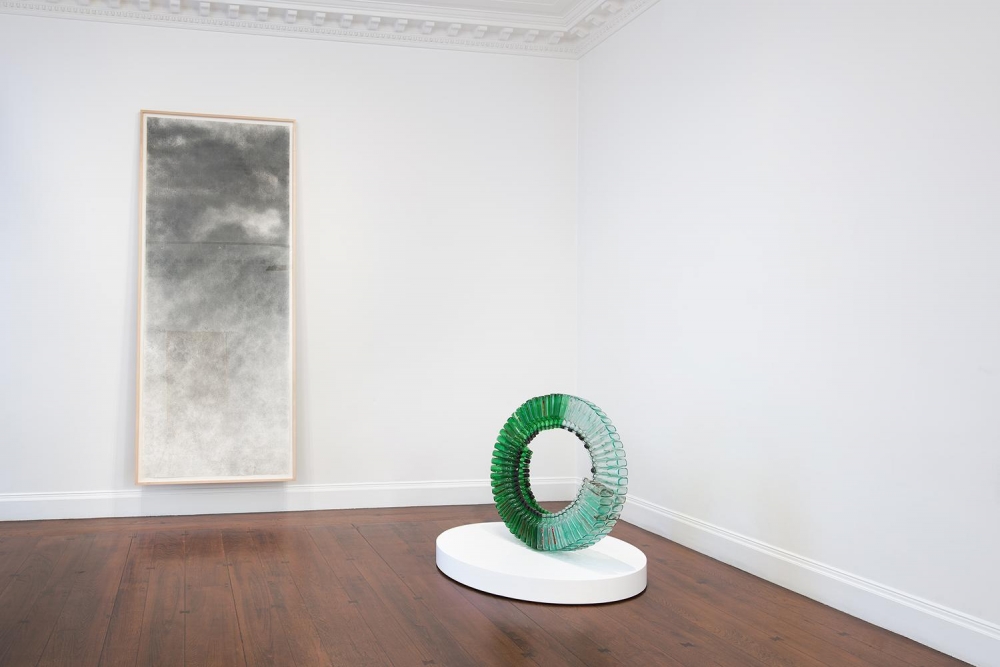 WHAT: “David Hammons: Five Decades”
WHERE: Mnuchin Gallery, 45 East 78th Street, New York
WHEN: Through May 27
WHY IT MATTERS: “It is an unfortunate fact that in this country,” the art historian Darby English has written, “a black artist’s work seldom serves as the basis of rigorous, object-based debate.” David Hammons, an elusive if highly generative artist who is the subject of this abridged retrospective at the Mnuchin Gallery, is a paradigmatic example of the phenomenon English describes. This interpretive “baggage” is literalized in the object that undergirds an elegantly canted framed abstraction on paper — by far the show’s most austere inclusion — on the exhibition’s second floor, which conceals behind it a wedged-in black suitcase, visible if you sidle up to the wall upon which the piece is mounted. And the ghostly chiaroscuro within the frame of this work, “Traveling,” 2002, was achieved with no ordinary pigment — it was rendered, in fact, in “Harlem earth on paper.”

Though Duchampian subversion and an arte povera sensibility might characterize, in impoverished canonical terms, the nature of Hammons’s art objects, he is an artist who has always understood the constructedness of art’s legitimation, and maintained a healthy distance — or is that derision — from/toward the art world’s machinations. Not too far from “Traveling” one finds “Untitled (Shoe Tree),” 1981, a picture documenting Hammons’s intervention on a Richard Serra, upon which he has urinated and over which he has flung tied-together sneakers. This was also, one might recall, the year in which an outrage over the removal of Serra’s “Tilted Arc” dominated the artistic scene in New York. (Talk about “tribal art,” to cite the words Hammons stenciled in red over a Summer 2007 issue of Artforum on view in a plexiglass box near the entrance.)

There is at least one other totemic work in this rich but sparse survey of the artist’s output over the last five decades: “In the Hood,” 1993, the decapitated hood from a dark grey hooded sweatshirt, or “hoodie.” That this work predated by 19 years the murder of Trayvon Martin (at age 17), and the concomitant emergence of the hoodie as a marker for the extrajudicial incrimination of blackness in America, is almost entirely beside the point. What matters is how this object might operate in the face of its recoding by a domineering politics of difference and the casting of its author as an object of social curiosity. Playing Hammons’s subconscious mark, the New Yorker’s Peter Schjeldahl had this to say about “In the Hood”: “It’s rivetingly clever, but may strike some, at least, as menacing.”