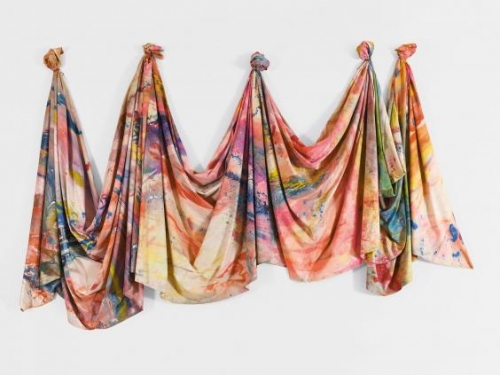 Critical and market attention for the abstract painter Sam Gilliam is at an all-time high. But longtime collectors and fans of the artist—who have watched him rack up accolades for at least five decades—consistently, and perhaps a bit defensively, caution against the word “comeback.”

Whatever you call it, Gilliam has been enjoying an unprecedented level of attention in recent years. The 85-year-old artist represented the US at the Venice Biennale way back in 1972; he was the first African American artist to do so. But his market has been slow to catch up—until now.

“This is his greatest renaissance yet,” says Jonathan Binstock, who organized Gilliam’s retrospective at the Corcoran Gallery of Art over a decade ago. “He’s had a couple of them at the very least.” Binstock is currently preparing another major Gilliam show, The Music of Color, at the Kunstmuseum Basel, scheduled to open ahead of Art Basel in June.

Nevertheless, Gilliam’s auction prices still lag behind many of his peers (who, not coincidentally, happen to be white). Fellow Washington Color School painter Morris Louis’s auction record is $3.6 million; Kenneth Noland‘s is $3.3 million.

If it feels like you’ve been seeing Gilliam’s work everywhere lately, it’s because you have been. Forty-five years after Gilliam first represented the US at the Venice Biennale, he returned to the city this past summer. His brilliantly colored unstretched canvas Yves Klein Blue (2017) exuberantly welcomed visitors to Giardini’s main pavilion.

In 2016, a major new commission, Yet I Do Marvel, was hung in the lobby of the highly anticipated National Museum of African American History and Culture in his hometown of Washington, DC.

In London, Gilliam’s work figured prominently in the Tate Modern exhibition “Soul of a Nation: Art in the Age of Black Power” (which opens at the Crystal Bridges Museum in Arkansas next month) and in Pace Gallery‘s recent group show of Washington Color School painters.

Meanwhile, in New York, Mnuchin Gallery mounted a presentation of his early paintings from 1967 to 1973. Surprisingly, it was the artist’s first solo show in the city for more than three decades.

Gilliam’s career is long “and it has been a successful one for many years,” says Binstock, who is now director of the Memorial Art Gallery at the University of Rochester. “As with many artists, there’s a cycle. There’s a process of growth or expansion and then perhaps a cooling or retrenching period. It’s hard to be the focus of everyone’s attention incessantly.”

He did things his own way, Binstock says, “by not signing on with a gallery; by selling out of the studio; by making abstract art when abstract painting was unfashionable; and by making abstract painting when black artists were being called upon by other culturally influential people in the black community to make art that was in line with the political cause. In other words, he actually did nothing that he needed to do in order to become successful.”

Indeed, for years, Gilliam showed only with smaller galleries: Marsha Mateyka in Washington, DC, and the now-shuttered Galerie Darthea Speyer in Paris. (It was, of course, also harder for a black artist to get major gallery representation.) But things began to shift four and a half years ago, when Gilliam had his first show with Los Angeles power dealer David Kordansky.

The gallerist was introduced to Gilliam through the contemporary art star Rashid Johnson, who organized a show of his work at the gallery in 2013. It was quickly followed by solo presentations at Frieze New York (2014) and Frieze Masters (2015), another show at the gallery (2016), and an accompanying monograph (2017). Yet another solo show is on the schedule for 2018.

During this period, Gilliam’s prices have risen dramatically. As recently as five years ago, a small painting with his signature beveled edges might bring about $10,000 to $15,000, says John McCord, a specialist in Phillips’s 20th Century and contemporary art department. “Now, you’d see that work would bring well over $100,000 or $150,000.” Prices for classic drape or beveled edge paintings from the late ’60s and early ’70s—Gilliam’s most sought-after work—can be significantly higher on the private market, ranging from $350,000 to just shy of $1 million, sources say.

A Market Finding Its Footing

Nigel Freeman, the director of the African American fine art department at Swann Galleries in New York, agrees that the market for Gilliam is “at an all-time high” following an acceleration over the past two years.

But some believe the work is still undervalued, particularly “when you consider how seminal some of the 1960s and ’70s paintings are,” McCord says. He notes that Gilliam’s auction prices have consistently outperformed relatively conservative estimates, a sign that the market is still finding its footing.

“Demand surged this year,” says Sukanya Rajaratnam, a partner at Mnuchin Gallery, citing the gallery’s show, as well as the Tate exhibition and the Venice Biennale, as catalysts. At Art Basel Miami Beach earlier this month, the gallery sold a work on paper from 1974 priced at $80,000. (That price is very close to Gilliam’s auction record for a work on paper, $81,250, set at Phillips in 2015.)

The Birth of the Drape Painting

Gilliam first rose to fame in the late 1960s with his drape paintings, which came out of his experiments with unsupported canvases. He said the works were partly inspired by watching women hang laundry on clotheslines from his studio window in Washington, DC.

He began to drape and suspend large paint-stained canvases, imparting an innovative sculptural element to the works. “These are perceived to be his biggest contribution to the history of art because they took painting off the wall and off the stretcher,” says Rajaratnam of Mnuchin.

The other particularly sought-after body of work is Gilliam’s “beveled-edge” or “slice” paintings, which he began creating in 1967. The works’ edges extend off the wall and toward the viewer.

Both series “highlight his interest in pushing the traditional boundaries of painting and creating innovative works that alter our perception of the picture plane,” says Dunham Townend, head of the modern and contemporary art department at Freeman’s, where the $370,000 drape painting sold last month.

Rajaratnam notes that Gilliam has been influential to younger artists who similarly blur painting and sculpture, from David Hammons to Oscar Murillo. “People are only now realizing the huge debt that is owed to Gilliam,” she says.

Kurt Mueller, a director at Kordansky Gallery, notes that in addition to being formally innovative, Gilliam’s work has another important element going for it: “undeniable beauty.”

Museums that had moved their Gilliam paintings into storage are now organizing shows around them, he says. And institutions that did not own major works—including the Museum of Contemporary Art, Los Angeles, the Dallas Museum of Art, the Rose Art Museum, the Metropolitan Museum of Art, and the Museum of Modern Art—have acquired pictures in recent years.

The Met, for example, owns two major Gilliams. It acquired Whirlirama (above) from Kordansky in 2014. It bought the other, Leah’s Renoir (1979), the year it was made—a testament to the artist’s long track record of institutional interest.

So what’s behind the uptick in attention today? Binstock sees a combination of factors at play, including recent interest in the work of older African American artists, particularly those who worked in abstraction; a broader push to re-examine artists from the ’60s and ’70s who have either “fallen through the cracks or not been the focus of the lens”; and the “sheer importance of Sam’s contribution to our understanding of what painting can be.”

Roxanne Cohen, director of art advisory at Pall Mall Partners, notes that market interest in the artist coincided with a shift away from young, emerging painters whose prices eclipsed those of Gilliam during the recent art-market boom.

“Collectors are looking to see something new and different, but at the same time to collect an artist who already has an established career,” she says. “They are moving away from the emerging market as it can be more volatile.”

Gilliam was born in Tupelo, Mississippi, in 1933, the seventh of eight children. He began painting when he was in elementary school and graduated from the University of Louisville in 1955. After serving in the US Army in the late ’50s, he completed his MFA in 1961. He has lived in Washington, DC, since 1962.

After making his name with the drape and slice paintings, his approach changed dramatically in the 1980s, when he began adding multiple layers of thick acrylic paint to the canvas. These so-called “quilt” paintings involved cutting geometric shapes from the encrusted surface and rearranging them in patterns reminiscent of the African American patchwork quilts he remembered from his childhood.

Freeman of Swann says that as many of the ’70s works find their way into museum collections, there is growing interest “in his earlier ’60s hard-edge paintings and his later collaged paintings made in the early 1980s.”

For those who have followed his career for decades, this latest embrace of Gilliam’s full body of work is already overdue.

artnet News
Back To Top