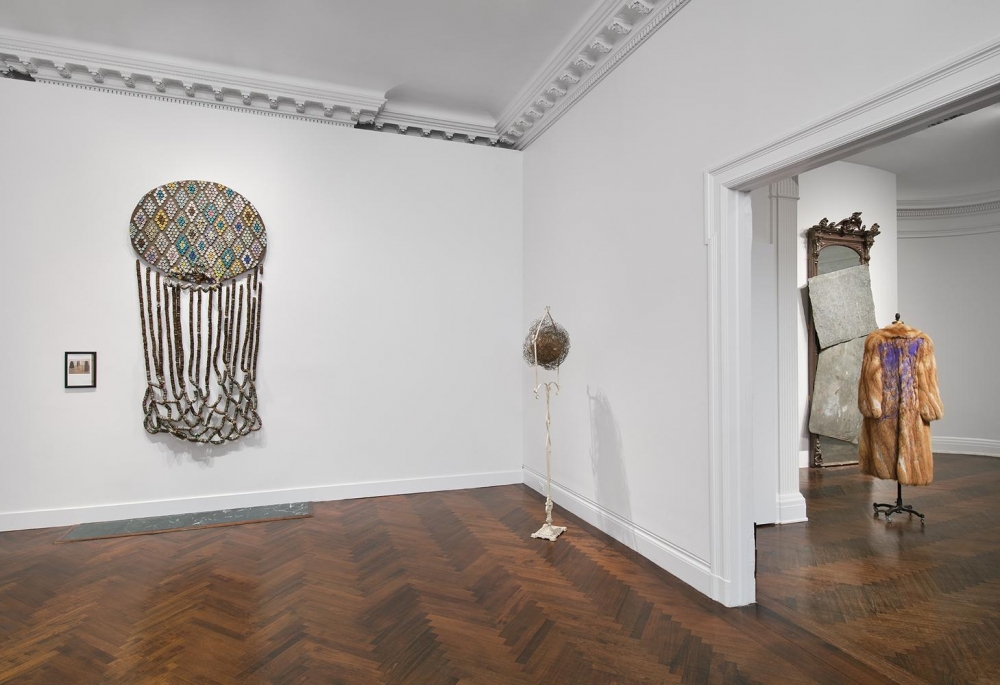 1. David Hammons at Mnuchin Gallery, through May 27.  “David Hammons: Five Decades," the first survey in 25 years for the elusive artist, has already received a great deal of acclaim. I've joined the chorus not only since this is one of the most visually and aesthetically striking exhibitions in town—a must-see—but because it also touches on hot-button socio-political issues that are as pertinent today as ever, especially as the country roils in the midst of a polarizing presidential election.

Racial conflict, class struggle, an exploration of power, oppression, and the nature of authoritarianism, are all explored in the 34 works on view, spanning 50 years. Hammons is a voice of the streets, of the downtrodden and the disenfranchised. There is more than a little irony in the fact that the 72-year-old artist has chosen to present this important retrospective of his work in a posh commercial gallery in Manhattan's Upper East Side, a favorite neighborhood of the well- heeled and the empowered.

Despite the aggressive stance and assertive worldview in his work, Hammons is never merely didactic. Each of the pieces on view bears an elegant, formal beauty; his is a specific brand of street-smart poetry with an acerbic edge. The first work encountered in the show, Which Mike do you want to be like. . .? (2001), a work featuring three difference types of microphones, alludes to African American icons named Michael—Jackson, Jordan, and Tyson. Untitled (1989); a green glass sculpture made of empty bottles of cheap wine and booze glued together and arranged in a circular shape about three feet high, refers to the disparaging cycle of alcoholism. Decrying the disproportionate number of African Americans in US prisons, one the most potent pieces here, Orange is the New Black (2014), illuminates the problem by means of a ritual object: a Janus- headed dog. The once noble, or perhaps sacred carving has been defaced, though not destroyed, by an incongruous and disturbing coat of garish orange paint.