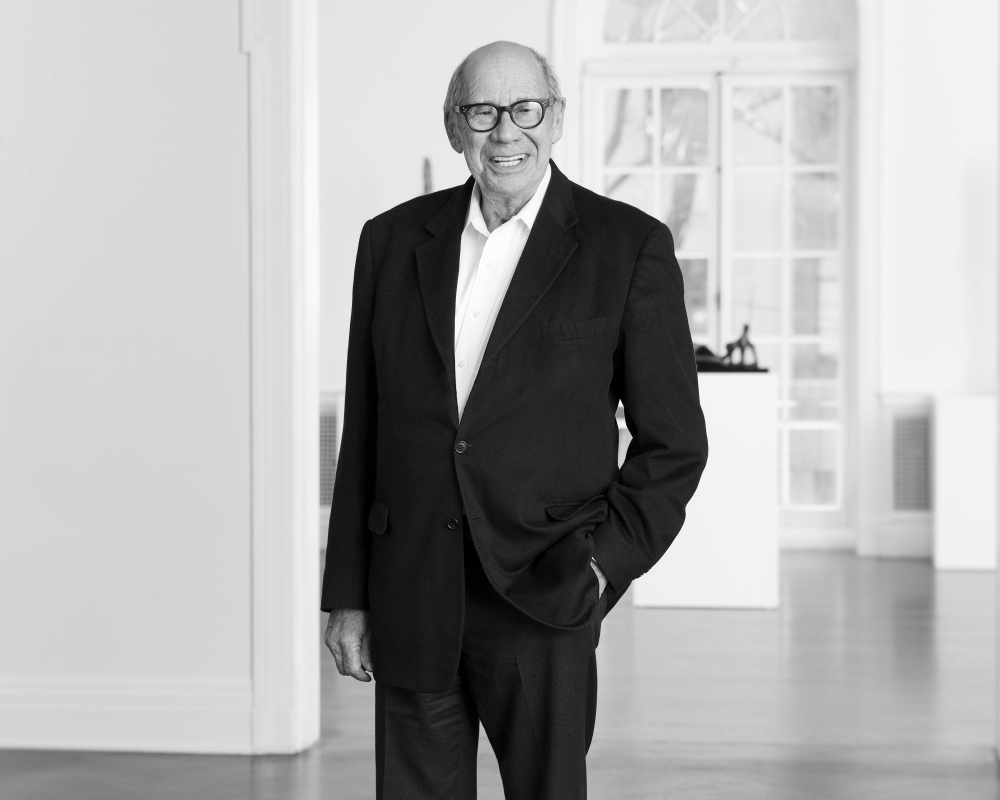 ARTnews: So it was dealing that got you into collecting, right?

Robert Mnuchin: I’ll tell you my punchline, which may sound corny to you, but I genuinely believe what I have to say: I’m really a collector at heart, who happens to be a dealer. I feel that every dealer should be that way.

I grew up with some art, not a serious collection in terms of collectors, which is a strange word when you think of it. There’s a narrow difference between collector and people who love art and want to live with it, but somehow there is a difference in my mind. One is trying to specifically build something and the other relates to the intellectual achievement of living with things that are beautiful and things that enhance people’s lives.

If the experience of living with a work of art is going to make life better for you, bring you joy at having it around, that’s going to be marvelous for you.

Having grown up around art, I then got distracted. I had to do some things, like go into the army, and try to get a job on Wall Street for 15 dollars a week. All of that distracted me for 8 years.

Then I met my wife, my present wife Adriana, and we discovered we had a real common interest in art.

I don’t want to put down anyone who does it differently, but we didn’t think of ourselves as collectors. Buying art was not the focus. Seeing art, focusing on art, going to museums, reading about art and sharing the experience together was what we did for a long time, and gradually we started to buy a little.

In the beginning, at least for us, that was a great part of the pleasure, that it was a shared experience, and in the beginning we bought what we each wanted.  Later, it took us five to ten years, we realized we'd bought, his, hers, and ours.

What were some of “yours”?

I loved Horst Antes. I thought it was beautifully painted, very colorful, very marvelous. We had an enormous collection of Antes, four Antes, and it made up our dining room.

I’ll tell you what happened. Adriana, my lovely wife, said to me one night, ‘Robert, we have a problem. This dinner party we’re having with four lovely couples? We’re going to have to go out. Three of the wives called and said, ‘Listen, I don’t want to sit in your dining room and look at those scary pictures on the wall.'” You can imagine what happened to the Horst Antes collection.

The last of them I actually sold to Ernst Beyeler, as part of something I was buying from him. So it wasn’t the worst, but suffice to say his career didn’t develop the way I thought it would.

So then things became a little more directed towards buying things that were “ours”?

We slowly started to have two things develop. Our tastes and our interests started to narrow because there was so much more art and we weren’t looking specifically to have a theme. But we found we responded to abstraction and in responding to abstraction it was very easy to focus on post-World War II American art. So we slowly started to own a few works by de Kooning, particularly de Kooning in the ’70s. I was lucky enough to come meet Xavier Fourcade, introduce myself, and become very close to him, and consequently the work of de Kooning, from the middle ’70s through the middle ’80s, all the new work that came out, I got the opportunity to visit. Fourcade was four blocks away. We’d have a scotch at seven in the evening, and he’d show me the new works he got. He took me out to de Kooning’s studio in Springs [on Long Island] many times.

De Kooning, Rothko, Kline, Still—that generation became what we collected because abstraction, we slowly found, was what we were most interested in.

Remember now until the 1990s I was a workaholic on Wall Street, who loved what he did, but really was a workaholic. It’s truly interesting, though. I believe when you care enough about something, you find the time.

So we found the time to go to museums, and we found the time to read and talk together about art, and visit dealers and shows and participated in what was then the new quote “hot”—I hate that phrase—the new popular art of the ’80s. Schnabel, Kiefer, Baselitz, etcetera, who were very, very popular artists between Mary Boone and Leo Castelli. We were right there on a Saturday, doing the gallery march.

You collected them too?

We thought there were some wonderful pictures and today we would have moved, but these were very big paintings without exception—we didn’t have the space.

That was not where the serious collecting was. In the late or middle ’70s, that was when we saw our first de Kooning from the ’70s, at a gallery in L.A, the Jim Corcoran gallery, and there was born the name C&M Arts. He joined me in opening my gallery C&M Arts. But we saw this de Kooning which we loved, and I was afraid to ask him how much it was. ‘Adriana, it’s de Kooning, we can’t own a de Kooning!’ She said, ‘Go ask the man,’ and he said we could.
When we found the right one we didn’t always have the cash. We said: let’s find the right picture first and we’ll worry about the money later. But we had quite high-quality pictures, and love them dearly.

“Excellent” deserves then, and deserves now, and will always deserve, a premium.

Ronald Lauder has said there are three categories of art. “Oh,” “Oh, my” and “Oh my God,” and he buys “Oh my Gods.” How did you know when you saw something in the third category?

It has to be an artist I know, and an artist I’ve thought about, and the kind of work I’ve always wanted. I suspect that’s it.

I remember a Franz Kline I bought. I got a call from a dealer around 3 or 4 o’clock in the afternoon. He said, ‘I got a painting. I think you’ll like it. It’s a black and white Franz Kline.’ So I said: I’ll be there at 5. I didn’t know how I was going to get there by 5.

I got there at 5:15. I liked it very, very much. I said I gotta find Adriana. Can you stay until 7? When she finally came she said, “Robert, can I talk to you for a moment?” She said: “What are you waiting for? This is the picture we’ve been waiting for four years!”

When I went into business, which was ’92, I didn’t want to be competing with my own gallery. I wouldn’t say we never bought anything after that, but basically we weren’t collectors, because I was trying to get material, and sell it through my gallery. That period of the important art we own was between ’73 and ’84, something like that.

Those pictures that we own have nothing to do with C&M, L&M, or any of the various names we’ve had for my gallery. They’re totally, totally separate from my gallery, and have never had anything to do with them.

You still own most of them?

We have a home in upper Connecticut—Litchfield County. Most of it is there because we have more wall space. We have an apartment in New York, and we have some pictures there. Numerically we don’t have a big collection. You’re talking about 10 to 15 pictures.

Yeah. I couldn’t say you were wrong, let me put it that way.

ARTnews
Back To Top