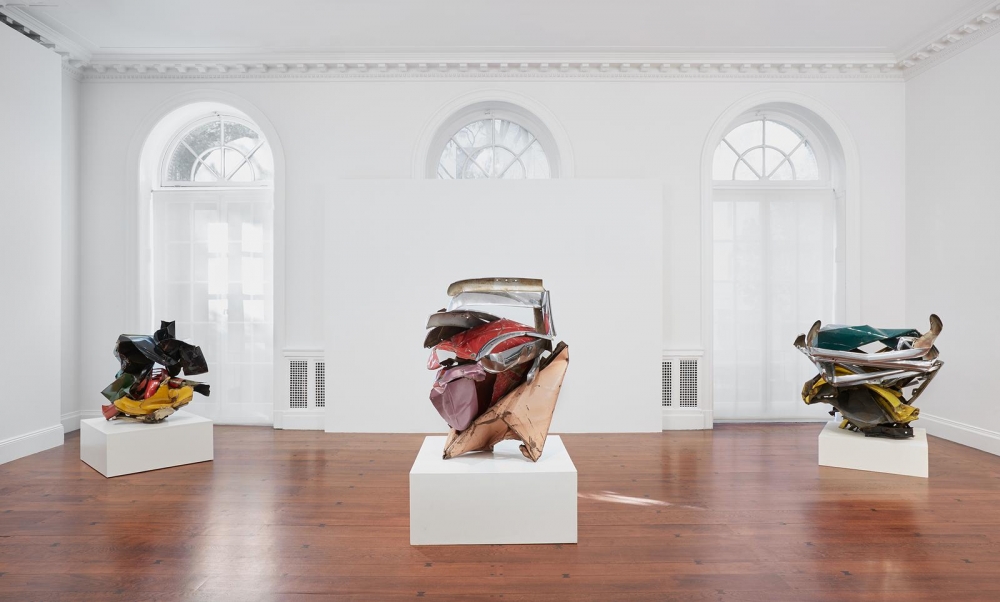 "The hard, sweet, pastel enamels, frequently roses and ceruleans, of Detroit's imitation elegance for the poor," is how Donald Judd described the palette of sculptor John Chamberlain, whose early Abstract Expressionist works feature spare car parts manufactured in the Motor City. Judd compared their shape and tone to Willem de Kooning's paintings of 1955-1956, an observation confirmed by Chamberlain himself who said, "[Franz] Kline gave me the structure and de Kooning gave me the color."

Gallerist Robert Mnuchin takes these observations a step further, finding commonalities between the two artists in mid-and late-career phases with his show, "Chamberlain/ de Kooning" at Mnuchin Gallery in New York through December 22.

"I do see a relationship in the work," says Mnuchin. "I see where shapes and figures in one are a companion to the other, the color, particularly in some of the Chamberlain works. They're great colorists together and they're great abstractionists together."

In de Kooning's case, the late-career transformation coincides with reuniting with his wife, Elain Fried, whom he had been estranged from since the late 50's. In the interval, he fathered a child by another woman and had an affair with Ruth Kligman, Jackson Pollock's girlfriend, who survived the car crash that claimed Pollock's life in 1956.

In the mid '70s, de kooning and Fried moved to Springs, Long Island, where he sobered up on his way to shocking the art world with a series of large-scale abstract paintings, making a new direction for the artist. The latest work in the show is dated 1986, a year before he began showing signs of Alzheimer's-related dementia. Over the course of the late '70s and the 300 works painted in the '80s, a cooler palette began to emerge, with brushstrokes morphing from violent to caressing, featuring calm, melodious compositions tending toward minimalism.

"Fourcade said there is a woman in every de Kooning," Mnuchin says, recalling a comment from the artist's dealer, Xavier Fourcade, who lived only two blocks away from the gallery on New York's Upper East Side. "He was saying there's a sense of woman." You can feel it: the shape, the lines. There's woman in de Kooning."

An art exhibitor since the early 1990s, Mnuchin opened his current gallery in 2013. It functions mainly as an exhibition space, offering small-scale shows often curated with a focus on a specific period in an artist's career. "My great joy is putting on exhibitions and striving for them to be museum-guality," says the 83-year old Mnuchin, whose current show is his eight highlighting the works of de Kooning. "If there's one reason I became an art dealer, it is because I wanted to curate shows."