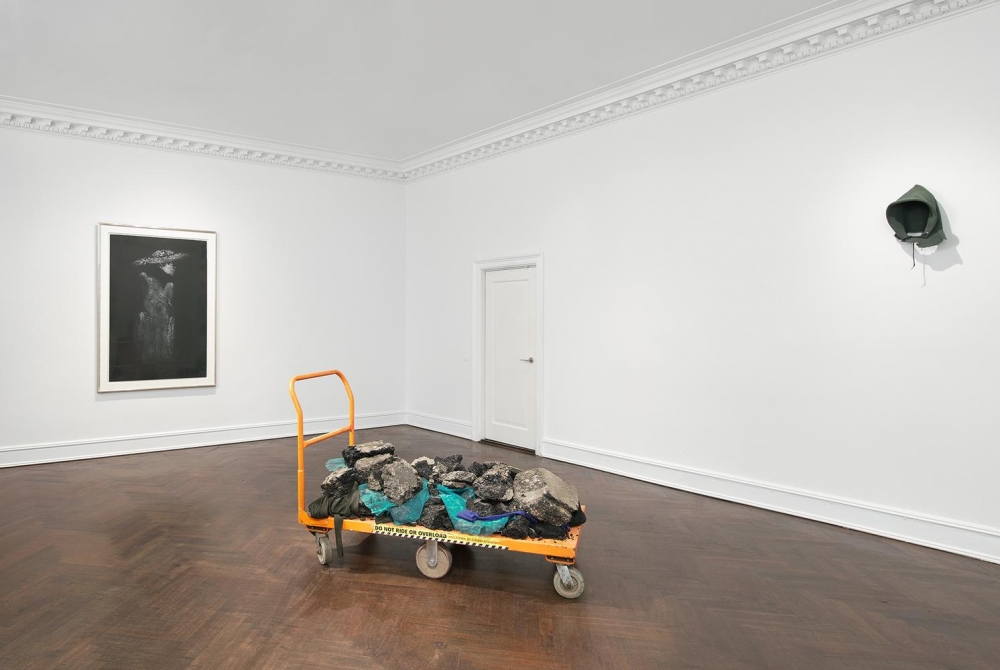 Many writers — including, most recently, Peter Schjeldahl in the venerable magazine The New Yorker — have characterized David Hammons as “elusive” and “difficult.” According to Schjeldahl: “The artist spoke with me, bracingly and delightfully, for a column in this magazine, in 2002. He wouldn’t do so again.” The ostensible reason for Schjeldahl’s rebuffed overture to the artist was the exhibition, David Hammons: Five Decades, at Mnuchin Gallery (March 15–May 27, 2016). According to the gallery press release: “[...] this will be the first exhibition of its kind in twenty-five years. The show, organized with Hammons’s support, will trace the evolution of the artist’s entire oeuvre from the late 1960s to the present day.”

It was the curator Tom Finkelpearl who organized David Hammons: Rousing the Rubble, 1969–1990, the celebrated, eye-opening retrospective at PS 1 (December 16, 1990–February 10, 1991) that directed the art world’s attention to Hammons. Six months after this career survey opened, the artist received a well-deserved MacArthur “Genius Grant.”

The rest, as they say, is history, which, in Hammons’s case, is hard to pin down. He doesn’t have a regular gallery dealer, no Gagosian or Zwirner flogging his wares. He refuses to be on the scene – someone who is regularly photographed at benefits, openings and parties – and who can blame him? He is the opposite of Andy Warhol, which I find immensely refreshing.

I confess I went to the exhibition intrigued rather than put off by these characterizations. I also knew that the artist, shortly before the exhibition opened, with many works borrowed from museum and private collections, removed a number of them and substituted – as the gallery press release states – “never-before-exhibited photographs from Hammons’s personal collection documenting key works and performances throughout his career.” I wondered if I would see photographs taken by Dawoud Bey that I had read about. One was “Shoe Tree” (1981), in which Hammons threw twenty- five pairs of sneakers over the top of Richard Serra’s sculpture, “T.W.U.” (1980) — an action that, if made in a crime-ridden community, would signal the availability of crack cocaine or mark the boundary of a particular gang, among other possibilities. The other was of Hammons’s performance, “Pissed Off “ (1981), showing the artist in a dashiki and khakis pissing on a Serra sculpture. These photographs seem to me to embody another history of New York art, which seldom gets seen, much less written about; it registers a searing dissatisfaction with the art world’s self-regard. In fact, I think it best that I don’t tell whether or not these photographs are in the show, and let you find out for yourself.

I don’t find fault with Hammons’s determined resistance to do the right thing, because maybe it isn’t so right after all. I think he is being elusive and difficult for a reason. For one thing, unlike lots of artists who are beloved by the art world and routinely featured in big, glossy picture spreads — from George Condo to Wade Guyton to Richard Serra — Hammons isn’t interested in turning himself into a commodity, a series of sound bytes about himself or his at. It is one thing to be a shape-shifting trickster and another to be a well-dressed clown.

One likely reason that Hammons refuses to become a sound byte (or spokesperson) is because he recognizes that the pervasive historical illness running through America (and perhaps all countries) is its inability to see the other/others. If you want to know how rampant it is, just think about Chris Rock, hosting the 88th Annual Academy Awards, and gratuitously making fun of three Asian children that he has brought onto the stage. Why would Hammons want to meet Schjeldahl twice? Isn’t once enough? Why would he want to give him the power and bragging rights, because, in the end, that’s what it would come down to, wouldn’t it?

What did we learn from the first encounter between them — that Hammons grew up in Springfield, Illinois, the youngest of ten children of a single mother? How easy it would have been for him to turn this single fact into proof that he pulled himself up by his own bootstraps, that America is the land of equal opportunity. How easily he could have made himself the hero of his own story. That he declined to do so is a measure of his dignity.

The fact that Hammons repeatedly refuses to call attention to himself reminds me of those who are all too willing to talk about their personal travails and support the myth of being self-made men. How often have readers had to learn that a well-known New York critic used to be a long- distance truck driver, or that the publisher of an alternative arts magazine was in a labor camp? In this regard, Hammons is the opposite of those who repeatedly point to their badges of authenticity and make pleas for the sympathy vote while seeming to be in constant selfie-mode. Rather than taking the bait, Hammons suspects that someone who is black (brown, yellow, or red) is seldom if ever seen in this country, that prejudices and stereotypes will always be applied, even by those who are well-meaning. As Jasper Johns once wrote: “Artists are the elite of the servant class.”

A number of Hammons’s pieces seem to have been generated by puns, a deliberate disruption of language that he uses to expose mainstream society’s assumptions regarding the power imbalance between white institutions and African American communities and individuals. The first piece to greet the viewer upon entering Mnuchin’s Upper East Side townhouse gallery is “Which Mike do you want to be like...? (2009), consisting of three microphones on metal stands with electrical cords gathered at their bases. The allusion is to Michael Jackson, Michael Jordan and Mike Tyson— three African Americans who were once celebrated media figures in the entertainment and sports worlds, two of which have since fallen from grace. They aren’t presented as personalities, but as mikes, bodiless instruments used to amplify your voice. All the microphones are too high for anyone to use them, even Jordan, who is 6’ 6”, suggesting that the desire to be like them is unattainable.

It is possible to see “Which Mike do you want to be like...? as a one-liner — a criticism that has been leveled more than once at Hammons. Another way is to see the piece as a cold commentary on a society that holds these figures up as role models, while also — most notably in the case of Jackson and Tyson — making fun of them. For an African American child growing up in America, are singing and dancing, playing basketball or boxing really the best options? If an artist is the elite of the servant class, what’s a boxer, basketball player or pop star?

Hammons’s sensitivity to language — from mass media (“Orange is the New Black”) to racial epithets (“Spade”) — is complemented by his incisive exploration of the porous border between seeing and not seeing, visibility and invisibility. This preoccupation with what it means to be seen/not seen runs throughout this nearly half-century survey, from the early body print “Spade (Power for the Spade)” (1969) to recent works, such as “Untitled” (2015), a thinly painted, brushy abstraction on canvas covered by the kind of ratty, orange plastic tarp seen at construction sites and used by the homeless, and “Untitled” (2014), an antique wood-and-plaster framed glass mirror more than ten feet high, with two sheets of gray, galvanized steel haphazardly attached to its front. You get the feeling with the oversized mirror that Hammons is daring collectors to hang it on the oversized walls of their Architectural Digest-worthy digs.

Jasper Johns famously wrote in a sketchbook note: ”Take an object. Do something to it. Do something else to it.” Hammons seems to have streamlined that observation— taking something and doing just one thing to it, which turns out to be an incredibly efficient joining together of two disparate objects, usually from very different economic classes. When Hammons attaches a dirty tarp to a wood-and-plaster framed mirror, he is covering and defacing an upper class sign of vanity. We want to see ourselves, not others and how they live. Does covering the mirror, leaving only part of the gold frame peeking through, suggest that we have looked away or that we cannot see?

Other artists join disparate objects, of course, but none as well as Hammons, even when he is not at his best. On the gallery’s second floor, a wooden drum stands by the window. An orange, taxidermied cat, nearly the same color as the drum, lies curled up on top of it, literally and figuratively muffling it. The piece is both perverse and domestic, a combination that reverberates with varying degrees of success throughout the exhibition.

In fact, all of the work on the second floor evokes a domestic environment that has gone off the rails. Listen carefully and you will hear traditional Japanese court music coming from two small speakers on the floor. A fancy fur coat whose back has been slathered with paint is on a stand near the covered mirror. Near the ceiling, “Basketball Chandelier” (1997) serves two functions: made of chandelier glass, venetian blinds, plumbing pipe and electric candles, it lights up the room while inviting you to indulge in a game of hoops.

In his use of materials — cheap liquor bottles, venetian blinds, dirt, drum, and glass chandelier ornaments — Hammons can be as democratic as Warhol was in his use of Campbell’s soup labels and Coca Cola bottles. The difference is that — in his portraits of movie stars, singers and collectors — Warhol was a flatterer who wanted to be loved by everyone: he wanted to assimilate. Hammons isn’t interested in assimilation because he knows it would be false. He would always be the outsider, the evening’s entertainment.

In “Orange Is The New Black” (2014), which is the title of a popular television comedy- drama about women in a minimum-security prison, Hammons covered an African sculpture — like the ones sold near the entrance to the Museum of Modern Art — with orange paint. According to the Bureau of Justice Statistics, one in three black men can expect to go to prison in their lifetime, where they are likely to wear orange jumpsuits. Hammons is the most old-fashioned artist of all: he is a moralist. His use of puns is a way to avoid becoming didactic. Instead of offering instruction, the artist invites viewers to connect the dots between an entertaining television show about life in prison, the title it shares with the paint-splashed sculpture, the street vendor, African art, orange jumpsuits, and the Bureau of Justice Statistics, and that’s just the beginning.

One of the photographs that Hammons added to the exhibition features the members of a man’s basketball team — they happen to be all white — posing for what I imagine is the class yearbook. One of the young men is holding a basketball on which the year “1936” has been painted, the same year that Jesse Owens won four gold medals at the Summer Olympics in Berlin. If, as has often been stated, Owens single-handedly crushed Hitler’s myth of Aryan supremacy, not much changed back in America: segregation continued unabated.

“The viewer,” Marcel Duchamp advanced, “completes the work of art.” In Hammons’s case, one could say that the viewer is invited to scrutinize the fissures and fault lines between races. On the first floor of the gallery Hammons has affixed hair from a black barbershop to a large ovoid rock, turning it into a faceless head. Other than the telltale hair, what will we ever know of this distinct/indistinct individual? For one thing, we would know less than an archaeologist who digs up a set of human bones buried more than a thousand years ago. Hammons’s elusiveness is consistent with his art. If we cannot see black people as anything more than stereotypes, how can we possibly see him?