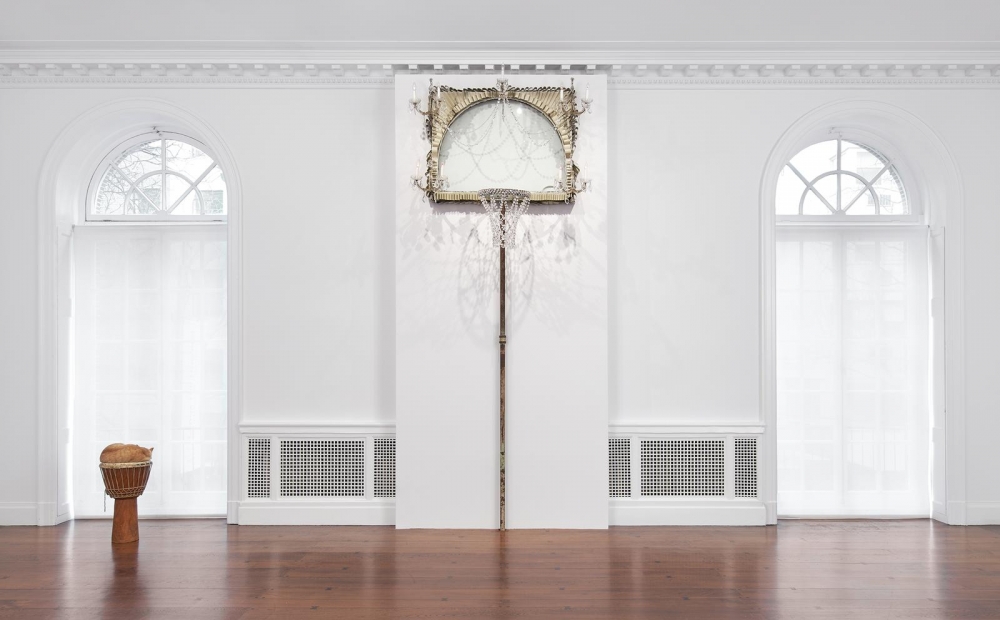 David Hammons is an artist with no shortage of press covering his prolific career. Yet, it’s no secret that he prefers to remain out of the spotlight, often declining interviews and not attending his own openings, keeping the art world pomp and circumstance largely at bay. This seemingly serves to add to the mystique of his personality but also to accentuate the sense of integrity that pervades his practice. Hammons' current show at Mnuchin Gallery, David Hammons: Five Decades, is an intelligent presentation of works organised in close collaboration with the enigmatic artist.

The show at Mnuchin is a small scale career survey, the first since MoMA PS1’s Rousing the Rubble 1969-1990 (16 December 1990 to 10 February 1991), and - including sculpture, painting, and personal photographs - reveals the diversity of his work from the late 60s until now. Reflecting upon his career one is able to see the artist’s exceptional ability to accurately and cleverly opine on issues of race and class.

He precisely dissects these issues with wit and consistent commentary on the state of both the art world and those outside and inside of it, often directly engaging the public in the process of doing so. In 1983 Hammon’s Bliz-aard Ball Sale, a performance piece in which he sold varying snowballs of different shapes and sizes in downtown Manhattan, showcased his ability to comment satirically both on his own art as a commodity, as well as issues of race.

As you enter the stately upper east side townhouse steps from Madison Avenue, where the Mnuchin gallery is housed, you are immediately greeted by the sound of Japanese court music filtering throughout the entire exhibition, a nod to Hammon’s long engagement with music through his work, and his love of travel and Japan. In contrast to the refined environs of the gallery space and the historical connotations of the exhibition’s soundtrack, much of the work in the exhibition seems to be decidedly inclusive of counter-culture.

Perhaps the strongest work in the exhibition, and one which resonates with the current political landscape, is In the Hood, a work Hammons completed in 1993. It consists of a detached section of a hooded sweatshirt, referencing a symbol that has become synonymous with both the Black Lives Matter movement and also the right-wing media rhetoric, where the ‘hoodie’ was used as an outrageous means to justify the shooting of teenager, Trayvon Martin. The work is hung on the back wall of the gallery like a sort of prize, visible upon entry to the exhibition.

Hammons has been praised by collectors and critics alike, and the art market also continues to be enamoured with his work. In a 2002 interview with the New Yorker, Peter Schjeldahl said of the artist that ‘nothing in contemporary art matches his poetic compound of modesty, truculence, and wit’. This wit is injected thoughout the exhibition, and one of the works, a small untitled sculpture displays this perfectly. A small rock resembles a human head and is covered in hair Hammons collected from a Harlem barbershop, drawing on metaphors relating to self-identification while reflecting the artist’s Arte Povera influences. This work has already been removed to be presented in an upcoming sale at Christie’s in May, with a rather hefty estimate. Another work, Basketball Chandelier, features a basketball hoop adorned with a crystal net and a decorative backboard of ornate glass. A comment on the belief that professional sports is the path to opportunity and success for young black boys to escape an impoverished lifestyle.

Hammons is often given the task of being ‘the voice of black contemporary art’. However, it seems that he simply strives to represent that which often is under- represented in blue-chip art galleries. His goal is not to represent the whole of black America, but simply to bring attention to the facets of our society that interest him, not only in relation to socio-politics, but also in relation to the rarified art world that he very comfortably occupies. David Hammons is a master of his craft. Ever-changing and evolving, his work remains substantive.