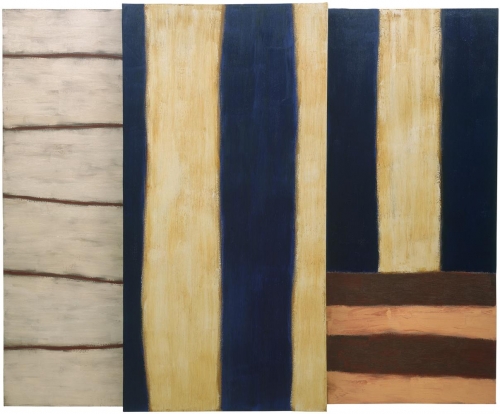 If you’re a devotee of Sean Scully’s earlier work, this has been a good year for you. In the spring, Cheim and Read hung an excellent and quite surprising show of the painter’s work from the 70s in a raw, industrial space in Queens. In September, Mnuchin Gallery followed with a selection of Scully’s work from the 80s. Mnuchin is located in a lovely upper east side town house, and the contrast of the two spaces seemed to track Scully’s change in fortunes over those two decades. A lot of Sean Scully all together is not always a good thing – I can remember thinking that much of the Met exhibition in 2006 felt sodden and repetitive – but the curation of the Mnuchin show was just about perfect; it highlighted all of Scully’s strengths: unusual color groupings, scale, both in the overall sense and in the orchestration of it’s change from section to section, surprising spatial fractures created by multiple canvases, and that distinctly European sense of longing and melancholy. It was difficult to decide which canvas to highlight in this limited space because the entire ground floor was so good, but the two-level No Neo from 1984 was a real knockout. At ten feet across and with its central panel aggressively jutting out into the viewer’s space it felt much like a stage set. But unlike many pictures that flirt with objecthood, it remained spatial in the painterly sense (as opposed to the literal sense) and also proved beyond a shadow of a doubt that Scully can maintain his gravitas while using colors that are undeniably cheerful.