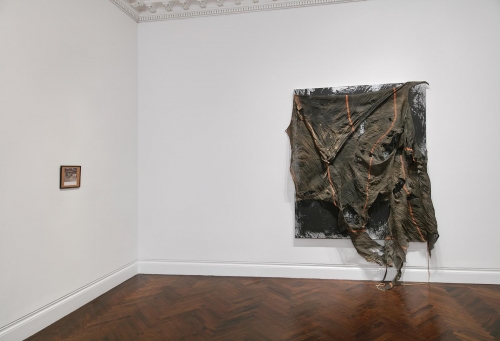 The staging of Hammon's work at Mnuchin Gallery amounts to the punch line of a joke that has extended throughout his half-century career.

Flying high outside the galleries of the Studio Museum in Harlem and overlooking 125th street is artist and perennial prankster David Hammons’s most famous work, Untitled (African American Flag), which reimages America’s flag in the Pan-African tri-color of red, green, and black. Whenever Hammons art is included in an exhibition, as the flag recently was at MoMA P.S. 1 during “Greater New York,” viewers are offered an opportunity to renegotiate what can be art. This is the case again, in the recently opened solo exhibition, “David Hammons: Five Decades,” at the Mnuchin Gallery through May 27.

“Five Decades” is Hammons’s first survey in about 25 years. In 1990, he presented the solo exhibition “Rousing the Rubble” at P.S.1 Museum, and since then he has used Mnuchin’s space twice to show “Fur Coats,” in 2007, and “Tarp,” in 2011, with just a handful of authorized offerings in between. The idea for this year’s show started as a museum-worthy retrospective that Hammons whittled down to 33 works, which include a series of never-before-seen photographs. Hammons cut, for example, his clever 1988 portrait (How Ya Like Me Now?) of Jesse Jackson, depicted with white skin, blonde hair, and blue eyes, from the show. The exhibition’s earliest work is the 1969 black-and-white body print Spade (Power for the Spade); it concludes with a vibrant and earthy abstract-expressionist painting wrapped in a tattered red tarp made in 2015.

During a time when museums are dramatically expanding their holdings beyond Eurocentric art, the Hammons exhibition is a tour de force of the art of black life. For the notoriously private artist, this exhibit seems to have presented another opportunity for subversion: Is there a better way to address the hard realties of racism and wag a finger at the institutionalized art world than to present his work in a genteel mansion converted into a gallery between Madison and Park avenues?

The staging of Hammons’s work at Mnuchin amounts to the punch line of the joke that has extended throughout his half-century career. Hammons, who is 72 years old, was born in Springfield, Illinois, to a poor family in 1943. During the early 1960s, in Los Angeles, he studied art and joined an informal group of avant-gardists including Noah Purifoy, Betye Saar, and John Outterbridge, of California’s Funk Art Movement. Hammons later became involved in the Black Arts Movement typified by groups like the Chicago-based art collective AfriCOBRA. In 1974, the artist moved to New York City and a Hammons-ian rule emerged: You never know what you are going to get from him, or where you’ll see it. He took over an electronic billboard in Times Square in 1982 to present cryptic messages to the public (HARLEM CAN YOU STAND SUCH BEAUTY? one read); in 1983, he sold snowballs alongside street vendors in Cooper Square; in 1986, he covered five 20- to 30-foot-high basketball hoops with bottle caps, an installation,called Higher Goals, that aimed to challenge the imaginations of opportunity-strapped black youth. In 1990, Hammons was awarded the Prix de Rome prize, and in 1991 he won a McArthur “genius” grant. Still, Hammons keeps his distance from the art world as such: He rarely shows, barely grants interviews, and doesn’t have a dealer.

The conceptual artist challenges the notion of a monolithic blackness in the sculpturethat opens “Five Decades,” Which Mike Do You Want to Be Like... ? (2001), which is comprised of three microphones set to different heights. Hammons evokes thephysicality and cultural positioning of Mike Tyson, Michael Jackson, and Michael Jordan with humor and word play: three black men who represent dramatically different illustrations of blackness. It also serves as one example, among many in the show, of the ways that Hammons is able to examine the human condition and uncover both trauma and transcendence.

For example, a wooden Bakongo sculpture uses satire to reveal a pause-for-thought truth about modern American society: Hammons painted the double-headed, nail-punctured dog orange and titled it Orange Is The New Black (2014). The Congolese sculpture, traditionally used to ward off evil spirits, makes you wonder who needs to be protected from the haunt —those swept up in mass incarceration or those who make and consume its watered down, pop-culture version.

In the corner of the gallery that Hammons personally arranged sits an untitled 2004 sculpture of a rock with a fantastically fresh fade fashioned from coiled hair swept up off a barbershop floor. The work evokes the ways in which the barbershop—where black boys and men often gather to form community—is, for some, as revered as any American institution. The process by which Hammons, like a barber, finely fixed nappy hair into a celebrated style also serves to question traditional politics of beauty.

Two mirrors, one shrouded in worn fabric (2013) and the other boarded up with galvanized steel (2014), purposely obstruct reflection. It seems that Hammons wants us to look harder at the conditions that shape black life because the truth is not always easily rendered. And, as with most of Hammons’s art, another message is just under the surface: the joke may be on us.

On the opening night of “Five Decades” a line of viewers hoping to glimpse Hammons’s art stretched down the north side of East 78th Street. Inside, an ssemblage of stars in the contemporary black art world—Thelma Golden, Glenn Ligon, Theaster Gates, Kimberly Drew—gathered to pay homage to Hammons and his work. Hammons was nowhere to be found, as is typical. By now, his absence from the social and commercial spheres of the art world has turned into a kind of performance art itself.

In a 1986 interview, Hammons said, “The art audience is the worst audience in the world. It’s overly educated, it’s conservative, it’s out to criticize not to understand, and it never has any fun. Why should I spend my time playing to that audience?” Thirty years later, the audience continues to show up, but Hammons might be having all the fun.