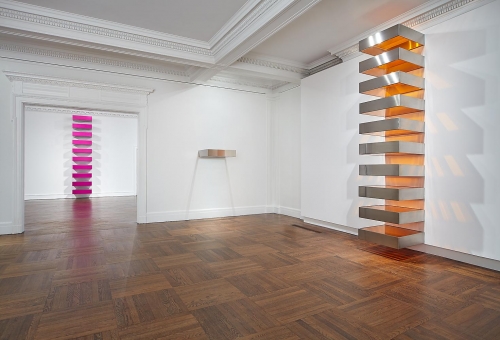 When it came to filling a gap in the collection of the Art Institute of Chicago, the single greatest priority for James Rondeau, its chairman of contemporary art, has been to find a 1960s stack, one of those serial boxlike units that are perhaps Donald Judd’s most popular works. “It’s something I knew we had to have since I arrived here in 1998, and probably curators before me were on the lookout for one too,” Mr. Rondeau said.

Through the Mnuchin Gallery in New York, the Art Institute was able to acquire “Untitled (DSS 120)” from 1968, what Mr. Rondeau believes is among the last of the artist’s 1960s stacks still in private hands. Judd, who died in 1994, created his first stack in 1965. This one, measuring 10 feet from floor to ceiling, consists of identical stainless steel and Plexiglas boxes cantilevered from the wall at regular intervals so they form a column of alternating solids and voids.

The work was included in exhibitions of Judd stacks at the Art Institute earlier this year and the Mnuchin Gallery last year. Like many museums, the Art Institute does not disclose what it pays for acquisitions. But this stack was offered at a Christie’s auction in 2009, when it sold for nearly $4.9 million.