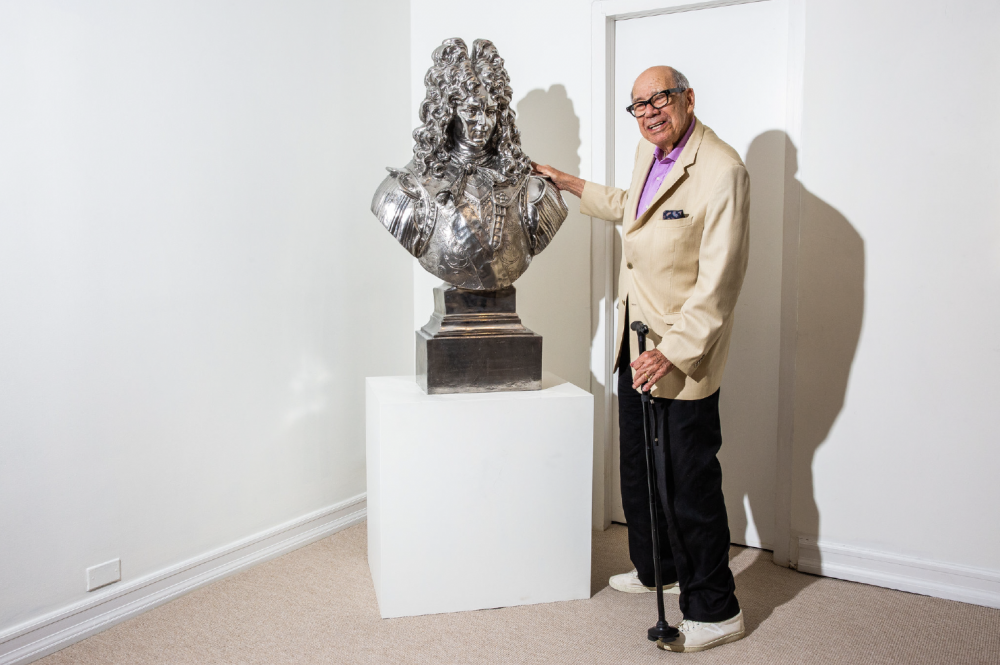 The treasury secretary’s father, a New York art dealer, paid a record price last week for a work by a living artist. But for whom?

On Wednesday night, shortly after the gallerist Mary Boone traded in the Hermès for prison garb, fat cats from what is often described as the world’s biggest unregulated market besides guns and drugs traipsed into Christie’s for its postwar art evening sale.

Peter Brant, who served almost three months for tax evasion, sat near the front of the gallery.

Nearby was Larry Gagosian, the veteran art dealer who has settled two government lawsuits related to taxes. He purchased a Warhol portrait of Elizabeth Taylor for $19.3 million.

But the man of the hour was the gallerist and former Goldman Sachs partner Robert Mnuchin, who was bidding for an anonymous client. He sat in an aisle seat near the front wearing a cream-colored jacket and got in on the action when one of the artist Jeff Koons’s rare silver bunny sculptures came up for auction.

It arrived for sale from the collection of the publishing magnate S.I. Newhouse Jr., who co-owned Condé Nast and died in 2017 at age 89.

Bidding started at $40 million and in less than 90 seconds reached $60 million. Around and around the bidding went, but the man who never stopped raising his paddle was Mr. Mnuchin, the 85-year-old father of Steven Mnuchin, the treasury secretary under President Trump.

There was nothing flashy about Robert Mnuchin, who was on a black Casio Ravine flip phone as the numbers sailed ever higher. Eventually, he placed the winning bid: $80 million, which with fees amounted to $91.1 million.

This broke the record for the most money paid at auction for a work by a living artist. (A Hockney piece at Christie’s last November also hammered at $80 million, but wound up about $800,000 cheaper than the Koons, once fees were included).

Over the next 24 hours, Mr. Mnuchin’s wife, Adriana, got numerous phone calls from friends who don’t know about art congratulating them on the purchase. This was pretty ridiculous.

The couple — who until Steve went to work for the president, led a pretty controversy-free life — are not in the habit of buying paintings for nearly nine figures. “We are not in the league,” Robert Mnuchin said in an interview.

Naturally, he wasn’t about to divulge whom he was buying the Koons for.

Several art world insiders believed shortly after the auction that Mr. Mnuchin might have been working on behalf of Mitchell Rales, the chairman of the executive committee at the Danaher Corporation, a Fortune 500 company.

Mr. Mnuchin helped build Mr. Rales’s collection, much of which now sits in Glenstone, a private museum in Potomac, Md.

However, people at higher levels later said a more likely scenario — perhaps the only one, perhaps not — was that he was purchasing it for Steven A. Cohen, the art collector and billionaire hedge fund investor who from 2016 through 2017 was banned from managing money other than his own as part of a settlement with the government over insider trading at his company, SAC Capital Advisors.

As part of the settlement, which also included a fine of $1.8 billion, SAC was disbanded. Mr. Cohen then launched Point72 Asset Management, which recently became fully operational.

Mr. Mnuchin declined to address the speculation and a representative for Mr. Cohen had no comment on the matter. Representatives for Christie’s also declined to comment.

Despite being a prodigious fund-raiser for the Republican Party, Mr. Cohen, 62, has a long and deep involvement in the more progressive-minded art world.

His collection over the years has grown with pieces by Andy Warhol, Pablo Picasso, Jasper Johns, Cy Twombly, Mr. Koons, and Damien Hirst. Many of those works are at his sprawling Greenwich, Conn., estate, known for its 6,000-square-foot ice skating rink in the backyard.

Although Mr. Cohen’s primary art adviser is Sandy Heller, he has lent works to Mr. Mnuchin’s gallery over the years. In 2015, Mr. Cohen was photographed alongside Mr. Mnuchin at the Mnuchin Gallery when it opened a show of the minimalist artist Carl Andre’s early sculptures.

Despite his connections to Mr. Cohen and the treasury secretary, Mr. Mnuchin is not a Republican. Over the last two decades, he has made more than 50 contributions to politicians. Nearly all were to Democrats, including Hillary Clinton during the 2016 election cycle.

On Friday morning, Mr. Mnuchin sat at a Saarinen table in the third-floor office space at his gallery, sipping black coffee from a blue and white cup that said “We Are Happy To Serve You.” The walls were blanketed in works by Mark Rothko, Willem de Kooning, and Arshile Gorky.

Mr. Mnuchin joyously discussed his long involvement in the art world, which began when he was growing up in Scarsdale with a father who ran a small law firm and collected pieces by Franz Kline and Rothko. (And a Matisse that the family later found out was fake.)

He was near tears when asked about his son Steve and refused to comment about their relationship. But friends said that he is in an impossible predicament, conflicted over his sense of duty about being a loyal father and his concern as a citizen that President Trump is bad for America.

But he can’t separate himself completely from his son.

The elder Mr. Mnuchin went to Yale University. After graduation, he went to work at Goldman Sachs, where he eventually took over the trading floor. He left in 1990 to open his gallery.

The younger Mr. Mnuchin — who is one of Robert’s five children and stepchildren — also attended Yale and then went to work at Goldman Sachs. He ultimately became its chief information officer. (Steven Mnuchin did not respond to a request for comment through the Treasury Department.)

Amy Cappellazzo, the chairman of Sotheby’s fine art division, has done numerous transactions with Robert Mnuchin over the years and described him as one of the straightest shooters in the business.

“He’s a modest guy,” she said, going on to describe him as a man who lives in comfort but not excessive luxury. “He doesn’t fly private planes to St. Tropez. Art was the primary luxury. It would have been vulgar for him to live another way.”

Adriana Mnuchin, whom Mr. Mnuchin described as “my best friend” and has been married to him for more than 50 years, runs a continuing education program called Roundtable Cultural Seminars from the fifth floor of the gallery’s Upper East Side townhouse.

Although Mr. Mnuchin has sold works by scores of modern artists and staged shows for African-American artists such as Ed Clark and David Hammons, he has done little flipping of his own. The pieces he and Adriana have in their possession are all things they love. “We’ve never had anything in a warehouse,” he said. “I don’t even like the word ‘collection.’ It sounds like stamps.”

His favorite artists are mostly the “golden oldies,” as he referred to them.

Currently, his gallery has up a 50-year retrospective of de Kooning’s work. “You will never again see anything like it,” said Ms. Cappellazzo, who caught the show earlier this year and said that few other dealers have the ability to secure so many prime pieces from blue-chip collectors.

Mr. Mnuchin also is a big fan of Mr. Koons. As well as a friend.

In 1996, a big show of Mr. Koons’s at the Guggenheim was canceled because of production delays. Mr. Koons was forced lay off the bulk of his staff. Mr. Mnuchin staged a 2004 exhibition of his work that Linda Yablonsky, a journalist and art critic who is writing a biography of Mr. Koons, said helped along his comeback.

“My sense is that that’s an astute observation,” said Mr. Mnuchin, who has ample amounts of kindness, charm, and self-regard.

Over the last few years, Mr. Mnuchin has been having trouble walking. This year, he skipped Art Basel in Switzerland for the first time in about two decades. So people were really happy to see him back out on Wednesday, playing a role in what was arguably the most exciting sale of the week.

There was not likely a big payday for the services he rendered Wednesday night, several art world figures said. But had Mr. Heller sat in the gallery doing the bidding, it would immediately have drawn attention to Mr. Cohen. And Mr. Mnuchin likes being on the floor in the middle of the action.

He finds moments like this a parallel to his previous career in trading.

“It was an intense business,” he said of working at Goldman Sachs. “It was very competitive and I was successful at building relationships with serious institutional people, that I could work for them and myself at the same time. That I could serve as their agent and be their principal. And I think I’ve carried that over somewhat into this.”