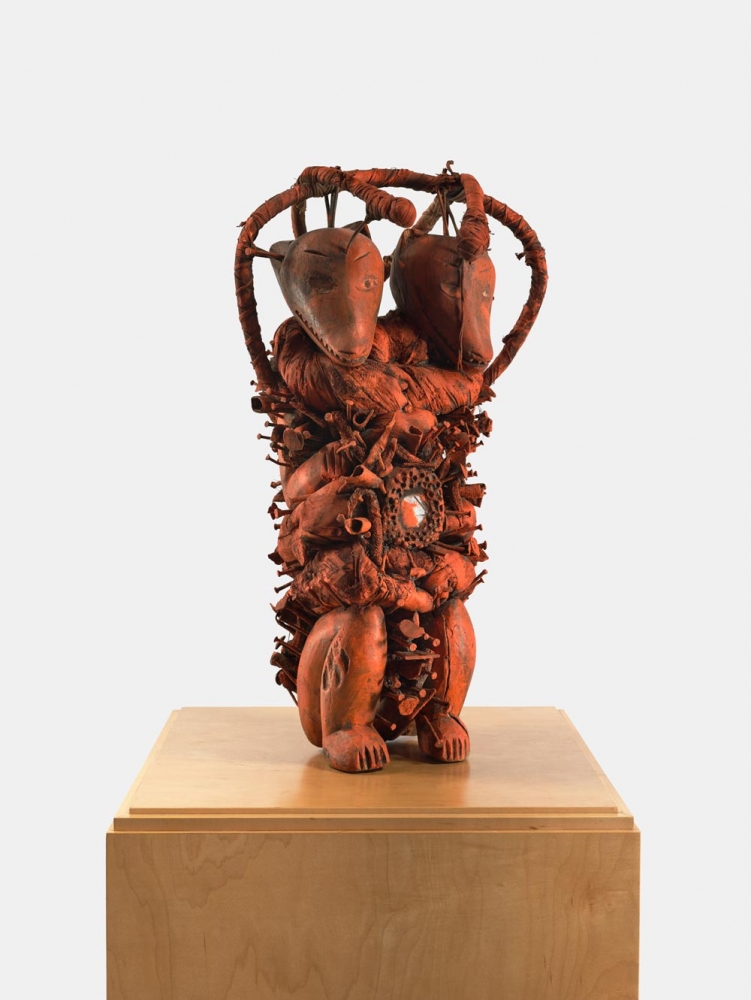 “I can’t stand art actually. I’ve never, ever liked art.” So the artist David Hammons told the art historian Kellie Jones in a 1986 interview. Then why do you make it? Ms. Jones asked. Because, Mr. Hammons offered, art is about symbols and “outrageously magical things happen when you mess around with a symbol.” Precisely such things are happening in the exhibition “David Hammons: Five Decades” at Mnuchin Gallery.

At the time of the interview Mr. Hammons was already a star, known for his formal and conceptual brilliance and his unpredictable ways. At various points in the 1980s, he sold snowballs on a sidewalk near the Bowery, erected three-story-high basketball hoops in Brooklyn, and made sculptures from hair swept from Harlem barber shop floors. He was creating — in public places with found materials for non-art-world audiences — odd, witty, barely graspable objects that were also emblems of wealth, class and race. And after making them, he’d change course, and location, or disappear, following a career GPS of his own.

In line with his untrackable ways, his first official career survey in 25 years is not in a museum on the Bowery or in Harlem, but in a commercial gallery of the blue-chip persuasion on the Upper East Side of Manhattan. And if Mr. Hammons hasn’t technically organized the show of 34 objects, about half on loan from public and private collections, he has seriously messed with it. He arrived when the original installation was finished, yanked out several major items, inserted some new ones, and added a soundtrack. The result is effectively a giant new multipart Hammons work, and pure enchantment, from object to object and room to room in Mnuchin’s two-story space.

The arrangement is only vaguely chronological, though there are early pieces near the start. They’re from the 1960s, when Mr. Hammons, who was born in Springfield, Ill., in 1943, was in Los Angeles, closely aligned with a community of black artists. Watts still smoldered; Black Power was in forward drive. It was a red-alert moment. Mr. Hammons responded to it with a series of ingenious life-size body-prints – literally, oil-smeared bodies, including his own, leaving imprints on paper — on political themes.

In some, like “Spade (Power for the Spade)” from 1969, he turned racist clichés on their head. In others, he invented a cast of imaginary characters, a kind of African-American “Our Town.” The woman in profile in the 1970 “Sexy Sue” could be a churchgoer dressed in her Sunday best and every detail of her floral-patterned lace dress is preserved. There’s a lingering myth that beauty and politics can’t coexist. Mr. Hammons finesses that myth.

The show then leaps to the 1980s, after he had settled in New York, picked up assemblage as his primary medium, and based it on materials grounded in black urban life. That life, as he envisioned it, was cosmopolitan in scope. An untitled 1987 wall sculpture made of hundreds of beer and soft-drink bottle caps worked into decorative patterns suggests a kind of “African” fantasia. (More recently, the Ghanaian artist El Anatsui has tapped a related format to bring new African art to the West.) Mostly, though, his turf is inner-city America, mapped out in abject fragments: the torn-off hood of a sweatshirt hung like a hunting trophy high on a wall; a coiling Minimalist-style sculpture made from bottles of skid-row wine.

Music, long one of the few routes to big-time success open to African-Americans, is part of the picture, referred to in an installation of three microphone stands titled “Which Mike do you want to be like…?” The implied choices are Jackson, Jordan and Tyson, but the mouthpieces that represent them are too high up for most people to reach.

Sports are another way up and out, but again uncertain. Mr. Hammons gave the sky-kissing hoops he erected in Brooklyn the wry title “Higher Goals.” And he brings a reduced version of one of them to Mnuchin in the 1997 “Basketball Chandelier.” In this case, the basket is at normal height, but unusable, made from ropes of cut-glass beads and flanked by ornamental sconces.

The 1990s brought a subtle shift in thematic emphasis in Mr. Hammons’s art, from race to class. He has always treated race as a kind of Duchampian ready-made, to be defined and deployed at will. And he has never tried to separate it from class. Still, you see the balance tilting in new combinations of street finds and luxe, or faux-luxe, materials in a spellbinding installation on Mnuchin’s second floor.

“Basketball Chandelier,” tall and tawdry, is in the center. To the left, with a title both punning and descriptive, is a piece called “Smoke Screen” (1990-95). A vertical swath of gold-colored fabric, carefully draped on a cast-iron stand, it looks regal until you notice burn holes in its surface, and cigarette butts poking through and scattered on the floor. Across the room is a painting or drawing on paper, also impressive in size and dated 2002, of what appear to be billowing clouds. Only up close do you see the trace of imprinted words and lines. The cloud patterns were made by a basketball dribbled repeatedly over the paper’s surface after being coated with what the checklist describes as “Harlem earth.”

Five years later, when Mr. Hammons had his first exhibition of new work at Mnuchin (then called L&M, with Dominique Lévy as a partner), overt references to racial blackness were pretty much gone, though politics was not. The 2007 show, a collaboration with his wife, Chie Hasegawa, consisted entirely of expensive fur coats, of the kind easy to spot on the streets of the Upper East Side, that had been defaced: burned, slashed, swiped with paint. (One is included here.) The effect was shocking. This was art about in-your-face violence, toward animals, toward property, toward privilege, toward the gallery it was in.

A second show soon followed, this one of big, studiously bland abstract paintings that Mr. Hammons had shrouded in industrial tarps, frayed blankets and plastic sheeting. He seemed to be on the attack here too, against a tradition of auction-friendly, history-book-hogging Modernism, or against the exclusions, segregations and refusals its values were built on. At the time, the new work, with its visual variety, humor and fulsome collage effects, generated cryptomodernist pleasures of its own and was hugely, and predictably, popular.

However you read Mr. Hammons’s recent art, and many ways are possible, one central fact holds true: He is messing with — expanding, exploding — ideas of what art means, and especially what “black art” means, making it broad enough to be borderless, useless as a descriptive label by a controlling and abidingly racist market culture. The soundtrack for his survey speaks to this. Years ago it might have been jazz; this time he has filled Mnuchin’s imperious quarters with classical Japanese court music, further shaking up fixed notions of Otherness.

Not that this makes art easy to love, particularly in a time of bloated prices and small ideas. The American writer Marianne Moore began a poem about poetry with these clipped words. “I, too, dislike it: there are things that are important beyond all this fiddle. Reading it, however, with a perfect contempt for it, one discovers in it, after all, a place for the genuine.” That’s what Mr. Hammons has evidently found in art — the genuinely political, the genuinely beautiful and the outrageously magical — and has been passing on to us these 50 years.