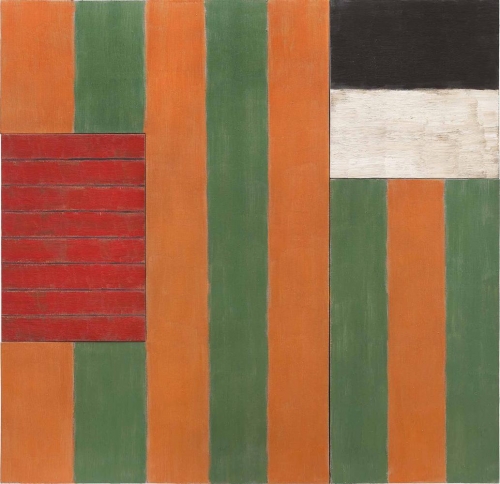 New York plays host this month to a rare treat: an exhibition of multipanel works ($350,000-$1.6m) by Irish-born artist Sean Scully, many previously never shown in public, that exemplify his work in post-minimalist abstraction.

Sean Scully: The Eighties (September 13-October 22) will be the first solo exhibition in the US dedicated to this decade of the artist’s career – a period that saw him move away from his precisely striped and gridded canvases of the 1970s to a more painterly approach that incorporated subtler shapes and multipart constructions. Organised in conjunction with the artist – and assisted by museums, dealers (including Timothy Taylor, Cheim & Read, and Galerie Lelong) and private collections – the Mnuchin Gallery show will highlight Scully’s object-like canvases that explore the geometries and architectural motifs inspired by his years living in New York.

The show picks up at a critical juncture in the artist’s life – one that saw him living in a loft in Tribeca and teaching at the Parsons School of Design. It was during this time that he began to salvage old boards and transform them into sculptural canvases that were painted on the front and sides, and later assembled into groupings to create various compositions. Inspired by the moody palette of Mark Rothko, as well as by his own life experiences – friends, family, and his urban surroundings in particular – Scully began to create the textured, tactile works that remain at the core of his practice today. “By striping up each panel separately, and forcing them together,” says Scully, “I was making romantic portraits of the city: all based on collision, pressure and disharmony.”

The gallery’s five-storey townhouse on Manhattan’s Upper East Side is showing significant works including A Green Place, 1987 ($1.2m, first picture) and Stranger, 1987 ($1.6m, second picture) – two oil-on-linen paintings that are each comprised of stripes in rich, saturated tones. Two of the works on view – By Night and By Day, 1983, and Secret Sharer,1989 – are reserved for museum-only acquisition, while others including A Bedroom in Venice, a sombre work from 1988, are on loan from the Museum of Modern Art. Also on show are smaller, more intimate oil-on-board paintings including Kasos, 1982, and Ridge, 1982. These are beautifully juxtaposed with bigger, bolder works such as Music, 1986, which employs impasto paint brushwork in hues ranging from deep orange to midnight blue.

Assembled as a group, the 20 works in the exhibition offer a three-dimensional survey of Scully’s turn toward earthy colours, light and texture.