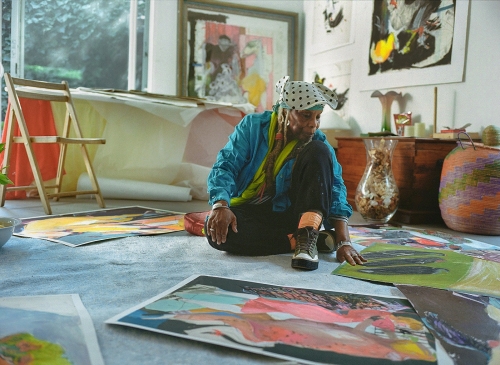 The painting that caught the curator’s eye was“Running Freed More Slaves Than Lincoln Ever Did” (1995), part of the exhibition “Generations: A History of Black Abstract Art,” which opened last September.

“Her handling in that painting — the dripping and drawing alongside the expressionist strokes — struck me as so unapologetically bold that I wanted to meet her,” the curator, Sukanya Rajaratnam, recalls. “And lo and behold, she just appeared that evening in front of that painting, and we immediately hit it off.”

Ms. Rajaratnam traveled to Ms. Lovelace O’Neal’s studio in Oakland, Calif., where she scoured warehouses of artwork to assemble the show, “Chasing Down the Image,” which is on view at Mnuchin through March 14.

Ms. Lovelace O’Neal, raised in Jackson, Miss., joined in civil rights marches and became involved with the Black Arts Movement. She earned an M.F.A. at Columbia University, and went on to become a professor of art at the University of California at Berkeley in 1979 and chair of U.C.L.A.’s department of art practice. She has been professor emerita since 2006.

At the gallery, she discussed making art in the deserts of Chile, in Paris, and in North and West Africa. Her works reflect her activism, with titles including “Running With My Black Panthers and White Doves”; her love of music, “Thelonious Searching Those Familiar Keys”; and her appreciation of nature — the whale-mating series from the 1980s — which will be the focus of an exhibition opening March 24 the Museum of the African Diaspora in San Francisco.

These are edited excerpts from the conversation.

Did attending Howard University at the height of the civil rights movement change you?

I didn’t want to go to college but I was expected to. I grew up on a college campus, where my father was a music professor. At Howard, I met Stokely Carmichael [whom she dated] and other folks important to the movement. We formed the Non-Violent Action Group, a precursor to SNCC [the Student Non-Violent Coordinating Committee, pronounced “snick”]. We brought in Bayard Rustin and Sidney Poitier to give lectures. James Baldwin became a mentor and personal friend. Themes of racial and social justice were always there in my art. I saw that the Cuban printmakers were good at propaganda, but I wasn’t. I couldn’t paint black women jumping out of fields with guns. Still, I grew up as a black woman in a segregated society, and my work always reflects that.

It was a dangerous time in the movement. The chairman of the art department would call me to say, “Your time spent in jail is not contributing to your time in class.”

During the summer of 1963, I was a resident at the Skowhegan School of Painting and Sculpture in Maine, where I had the freedom to do nothing but eat and paint. It was an important experience, to see how ideas succeed and fail and learn how to solve problems associated with that failure.

A year after graduation you married the poet and theater director John O’Neal. Did that change your art?

Not really. I met John O’Neal, a SNCC field director, in Jackson under tragic circumstances. It was at a SNCC meeting after Medgar Evers was killed, to let everyone know. We married in 1965; he was co-creator of the Free Southern Theater company in Jackson. When he became a conscientious objector in 1967, we moved to New York, so he could fund-raise for the theater, and I went to Columbia’s School of the Arts.

You started out doing social activist art and changed when you came to New York. Why?

I immediately butted heads with the chairman of Columbia’s art department. I was using real fast brush strokes in a de Kooningesque way. When you looked at it, you wanted to lick it.

I gave up my expressionist style. I starting applying layers of pure powdered black pigment on unstretched, unprimed canvas on the ground to engage with the dialogues around “flatness” then exemplified by the soak-staining methods of the Color Field painters.

The black pigment paintings were as black as they could be. They can also be seen as my response to my friends in the Black Arts Movement.

I’m reluctant to call myself an abstract expressionist or a minimalist. I call myself a painter. What I can do is paint and make things that are powerful. Galleries want to codify you. Every time you move away from the doctrine, you get questioned. Being unruly is my nature. As for doctrinaire, I had to blow it up.

How did you interact with the art scene here?

As a 27-year-old, I was dealing with the same issues as Joseph Stella and Donald Judd. We had wonderful arguments. It was important to learn from what these people were doing, and go off on my own path.

I fell in love with the work of Donald Judd. No matter how ego-involved he was, he came off as a sweet man. His work seemed to have a different edge from what the others were doing, which seemed so cold and uninteresting.

The beauty for me as an artist was using Manhattan as my teacher. On weekends we would go to bars, galleries and happenings. Amiri Baraka [the poet and activist] came to my studio and wanted me to do more images of the movement. I told him “Look at what Africans did with abstraction; talk about spirit!” My black paintings also spoke to the issues of blackness.

I became friends with Sam Gilliam [the black Color Field painter]. He supported me and my ideas as I fought the others. They were contemporaries, and I had to fight them for my own space. Male painters got a different kind of respect than women artists did. Today I was amazed how much I learned as a young girl of 27, kicking and screaming to make my own place in a white male bastion.

Why did you leave New York?

Because it got scary. I was living at 116th Street and Seventh Avenue, and the junkies had taken over my block. There were a lot of changes going on in the movement. Our leaders were being killed in horrific ways. Harlem was on fire at one point.

I got a job teaching at the San Francisco Institute of Art. I needed a studio. My husband divorced me. Wherever I lived, I worked. It was wonderful to set your own issues, problems, and the way you felt about them. I went to the aquarium once and saw whales mating. Then I saw them swimming in the bay. It was magic. God’s work. It was transformative. I painted it.

Was 1993, when you went to Paris, transformative?

I’d gotten a French government prize to work there for six months. My friend Carrie Mae Weems was there, too.

One of the highlights was the night the American Embassy gave a party for Toni Morrison after she won a prize, just as “Song of Solomon” was coming out. I went with Carrie. When we walked in, in that sea of white faces, Toni leapt up, she was so happy to see us. Then we went to see Nina Simone, and after her show she spent the evening with us. Later on, I had a show in Paris and Nina spent more time looking at my work than anyone else ever had, including my parents, friends and husbands.

Do you think, at 78, that you have achieved success?

In New York the tension in the run-up to the show was overwhelming.

But for me, every day that I can get up and go to my studio is a success. For decades I had to teach and lecture. For my father, who I’m sure is looking down from heaven, success is that I am able to be a painter. He is the one who let me do what I was supposed to do.

I think my art has been given a wide berth until now. You know, when you achieve stardom early on, you feel you cannot change your style. It was not that way with me. I could follow any thread I found. I could sit on something for months or years; something would come out of that incubation.

Do you have a message for others waiting for their moment of recognition?