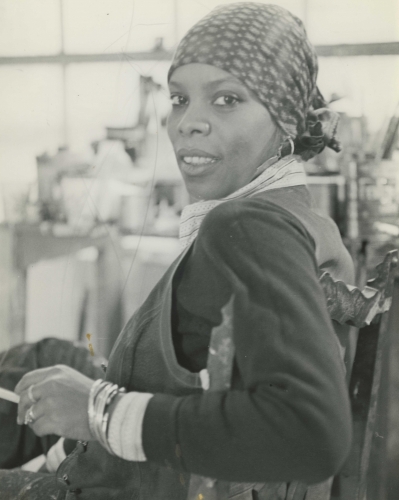 "Mnuchin Gallery is proud to announce Chasing Down the Image, a solo exhibition by Mary Lovelace O’Neal. The exhibition will survey over five decades of the artist’s work, spanning the late 1960s through the 2000s. This will be O’Neal’s first solo exhibition in New York in over 25 years. On view from February 6 through March 21, 2020, the exhibition will be accompanied by a fully illustrated catalogue.

Since the late 1960s, Mary Lovelace O’Neal has been known for her singular paintings that pair bold, monumental scale with layers of unexpected materials to explore both deeply personal narratives and mythologies as well as broader themes of racism and social justice and contemporary critical debates. With roots in both Minimalist and Expressionist painting, her imagery has, over years and series, fluctuated between pure abstraction, narrative figuration, and the evocative spaces in between.

Born in 1942 in Jackson, Mississippi, O’Neal grew up in Jackson, Mississippi; Pine Bluff, Arkansas; Gary, Indiana; and Chicago, Illinois, the daughter of a university music professor who fostered her interest in artmaking from an early age. She went on to earn her BFA from Howard University in 1964. While an undergraduate, she became an active participant in the Civil Rights movement, joining in marches, protests, and voting drives in Washington, DC and across the country with then-boyfriend Stokely Carmichael. Recognized by Howard faculty as a special talent, she was awarded a scholarship to spend the summer of 1963 studying at the Skowhegan School of Painting and Sculpture. There, she investigated an abstract expressionist style, paying close attention to the work of Willem de Kooning, Mark Rothko, and, especially, Franz Kline."

Ms. Lovelace O’Neal with a collage of memories printed and hanging in her bathroom. They include travels overseas, art openings and pictures with her beloved dog, Tillie.  Credit  Aubrey  Trinnaman for The New York Times 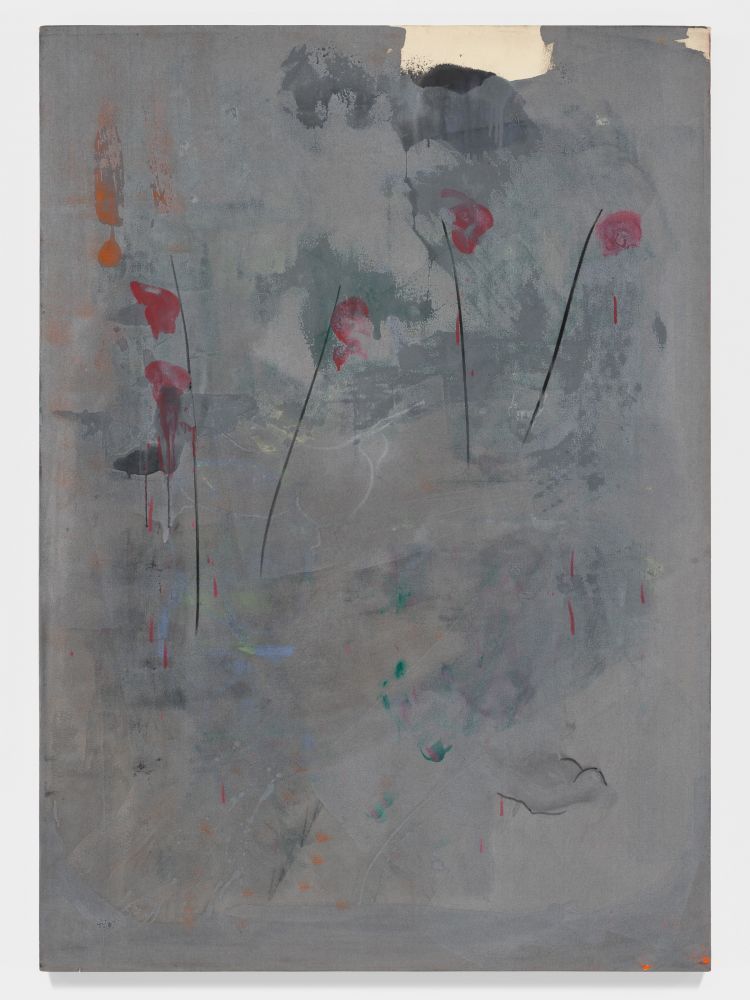 In 1968, O’Neal moved to New York due to her first husband, John O’Neal’s, status as a conscientious objector and his fundraising efforts for the Free Southern Theater. She studied at Columbia University, earning her MFA in 1969, the only African American student in her class. During this period, she developed her breakthrough body of work, the Lampblack series. In these paintings, O’Neal applied layers of loose, powdered black pigment to large, unstretched and stretched canvases using a chalkboard eraser or her hands, then punctuated her rich, velvety surfaces with spare white or colored thin lines that function similarly to Barnett Newman’s “zips.” By encasing the unprimed canvas fibers in pure pigment, she abandoned her expressionist style to engage with contemporary dialogues around “flatness”—as exemplified by the soak-staining methods of the Color Field painters— while her monochrome surfaces referenced Minimalist painting (Donald Judd was among her favorite lecturers at Columbia). However, her pursuit of abstraction using pure black pigment was also a wry response to her friends within the Black Arts Movement, who had criticized the lack of narrative social critique in her work. As she pointed out to them at the time, her lampblack paintings were “as black as they could be”; in addition to the literal blackness of their materials, their conceptualism linked them to abstract traditions in African art, in which intangible spirits or ideas are considered essential elements of sculptural form. The current exhibition will include a group of works from this seminal series, an example of which was recently unveiled in the permanent collection of the San Francisco Museum of Modern Art. 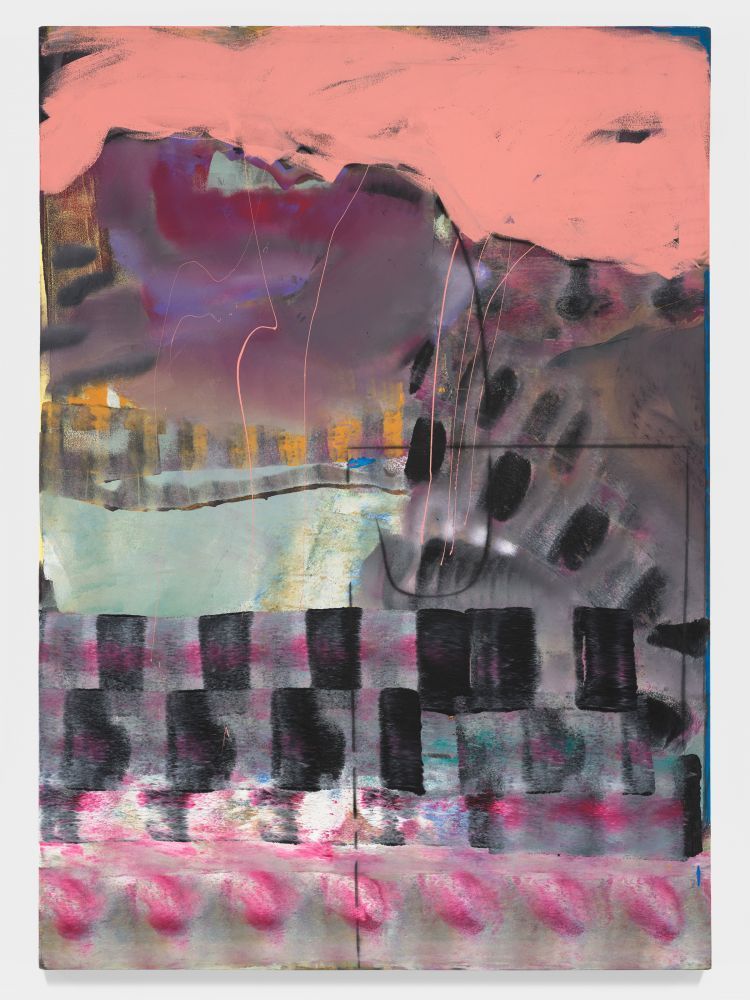 There Are No Such Thing As Witches (But They Do Exist) No. 2

Following her graduation from Columbia, O’Neal moved to the West Coast, where she established a studio in Oakland and took a teaching position at the San Francisco Art Institute. Throughout the ’70s, she would go on to teach part-time at the Art Institute as well as at California College of Arts and Crafts, Humboldt State University, Laney College, and University of California, Berkeley, where she became a professor in 1979.  In 1985, she was the first African American awarded tenure in Berkeley's Department of Art Practice and ultimately became Chair of the department. She has been professor emerita since 2006. Over her decades as an educator, O’Neal has continued to make work and has exhibited across the country and internationally.

In the ’70s, O’Neal reintegrated vibrant color and expressionist gesture into her lampblack canvases; she has said it was as though the black paintings had been “unzipped” to reveal the color underneath. She expanded her tableaux on a monumental scale, layering 7 x 12-foot canvases with charcoal, pastel, dye, and glitter, in addition to paint. These subsequent series take inspiration from music and literature as well as her own lived experiences, from vivid childhood memories to the varied color and light experienced on her extensive international travels, particularly those to North and West Africa and the Atacama and Sahara deserts. For example, in her Whales Fucking series from the ’70s and ’80s, the abstracted forms of magisterial sea creatures arch and glide across lush backdrops of layered brushwork. O’Neal has explained “Whales are associated with freedom and a tremendous intelligence we don’t understand”; the works were inspired by her observations of whales swimming off the California coast, as well as by D.H. Lawrence’s poem, “Whales Weep Not!”. In her Panther series of the ’80s and ’90s, abstracted black panther forms prowl and pounce through the halls of Moorish palaces. The paintings’ space and structure were informed by the vernacular architecture O’Neal encountered in Morocco, where she completed an artist’s residency in 1984. Their imagery was also inspired by the Gian Carlo Menotti opera Amahl and the Night Visitors, in which she performed as a child when her father staged a production at his university. The black panthers themselves draw associations to the artist’s long history of activism. In more recent bodies of work from the 2000s, O’Neal has continued to mine not only the architecture but also the fabrics, costumes, food, pottery, and fauna of the places she has lived and worked, including Egypt, Senegal, Nigeria, Brazil, and Chile. A fantastical cast of imaginary characters people many of these works, their stories unfolding enigmatically from canvas to canvas. 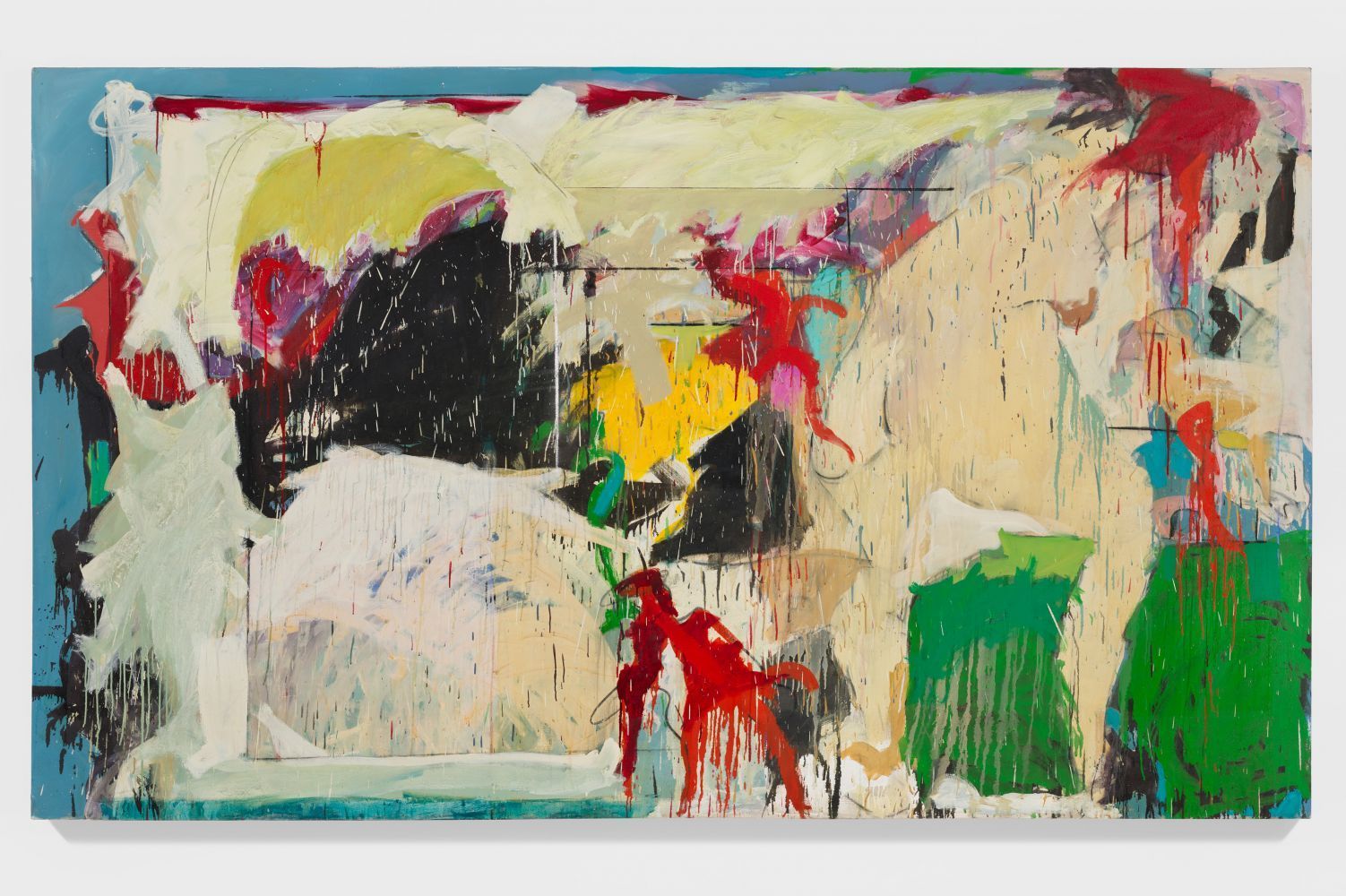 Chasing Down the Image will be O’Neal’s first exhibition in New York since her solo show at the French Embassy here in 1993. She has been the subject of solo exhibitions at the San Francisco Museum of Modern Art (1979), the Cité International des Arts, Paris (1994) and the Mississippi Museum of Art, Jackson (2002). An exhibition of her Whales Fucking series, Mary Lovelace O’Neal: Whales, a Romance…, will be on view at the Museum of the African Diaspora, San Francisco, from March 25 through August 23, 2020. O’Neal’s work is in the permanent collections of the San Francisco Museum of Modern Art, the Brooklyn Museum, the Smithsonian Institutions, the Baltimore Museum of Art, and the National Museum of Fine Arts, Santiago, Chile, among other institutions. She has been married to the Chilean painter, Patricio Moreno Toro, for the past 38 years. They split their time between Oakland, California and Mérida, Mexico.

The Four Cardinal Points Are Three: North and South

Thelonius Searching Those Familiar Keys (from the Whales Fucking series)

Running With My Black Panthers and White Doves  a.k.a Running with My Daemons (from the Panthers In My Father's Palace series)

Kurban, A Sweeter Day to Come (from the Panthers In My Father's Palace series)

Pink Self Portrait (from the Two Deserts, Three Winters series)

Forbidden Fruit (from the Lost in the Medina series)

There Are No Such Thing As Witches (But They Do Exist), No. 2

Long Ago and Far Away, Age Upon Age, My Tillie

Set Them Wings on That Table a.k.a Dem Bones

If He Whispers to Me, I'll Know He's the One

She is Living in the Clouds

The Four Cardinal Points Are Three: North and South

Thelonius Searching Those Familiar Keys (from the Whales Fucking series)

Running With My Black Panthers and White Doves  a.k.a Running with My Daemons (from the Panthers In My Father's Palace series)

Kurban, A Sweeter Day to Come (from the Panthers In My Father's Palace series)

Pink Self Portrait (from the Two Deserts, Three Winters series)

Forbidden Fruit (from the Lost in the Medina series)

There Are No Such Thing As Witches (But They Do Exist), No. 2

Long Ago and Far Away, Age Upon Age, My Tillie

Set Them Wings on That Table a.k.a Dem Bones

If He Whispers to Me, I'll Know He's the One

She is Living in the Clouds 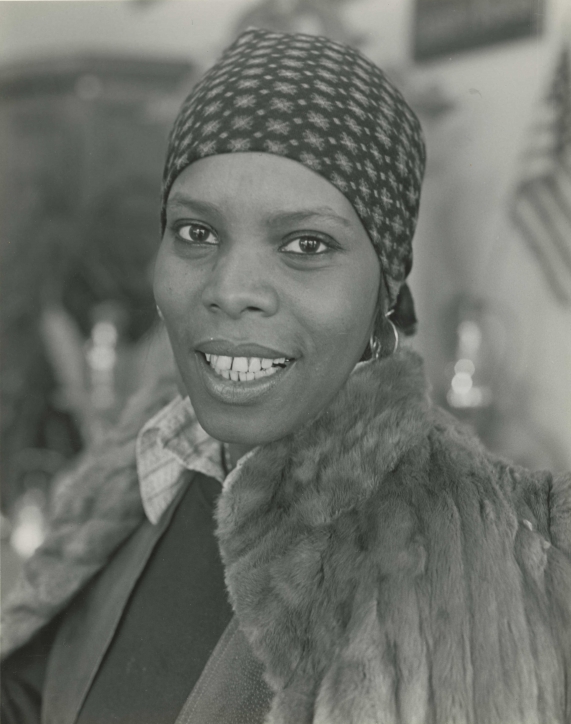 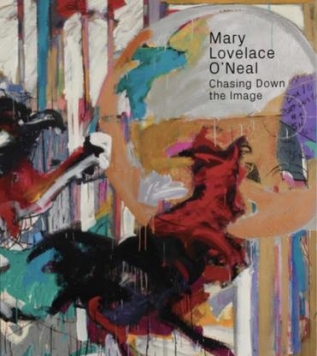 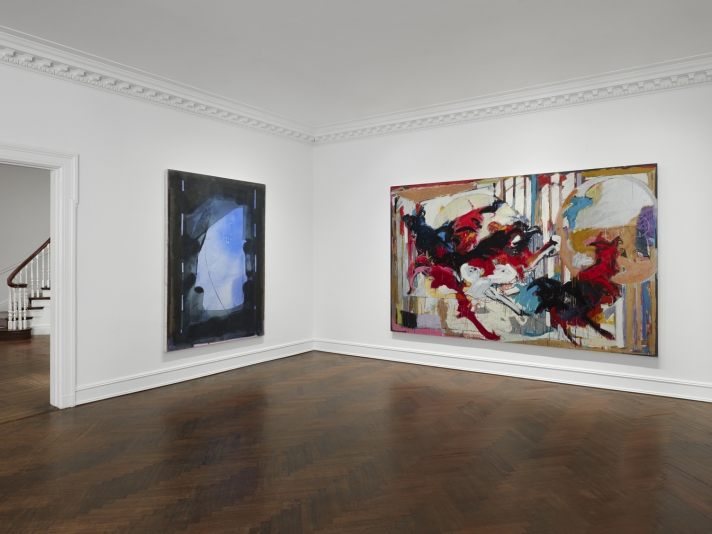 This remarkable show, of the abstract- and minimalist-inspired paintings of the established painter Mary Lovelace O’Neal, based in Oakland and Mexico, but an under-recognized and important artist in New York’s regard. It is her first show here in more than two-and-a-half decades. The artist, a daughter of a music professor, was born in Alabama but lived in a number of states. In 1964, she received her BFA from Howard University; then, in New York, she received her degree from Columbia University in 1969. 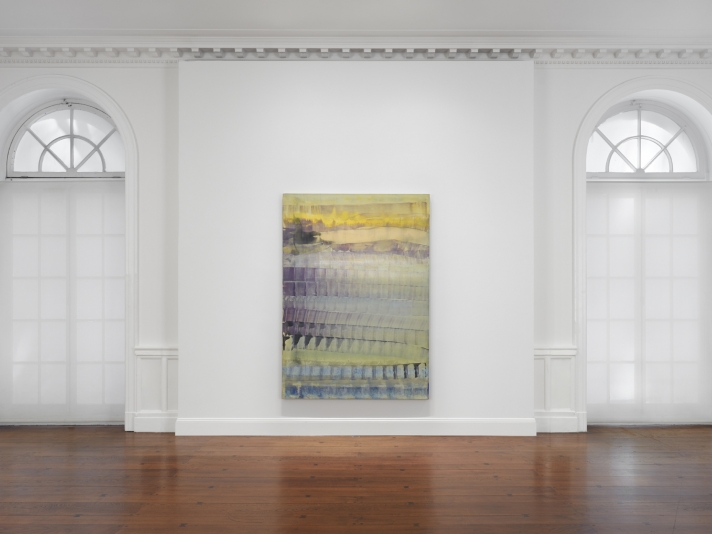 Mnuchin’s survey of Mary Lovelace O’Neal is a welcome spotlight on the underrepresented 78-year-old artist. Made between the 1960s and the 2000s, the bold paintings on view include unstretched canvases saturated with pigment and dashed with narrow wisps of color; giant pulsating expressionistic paintings with feverish brushstrokes and rashes of drips; and spiritual color fields doused in rich, translucent hues. 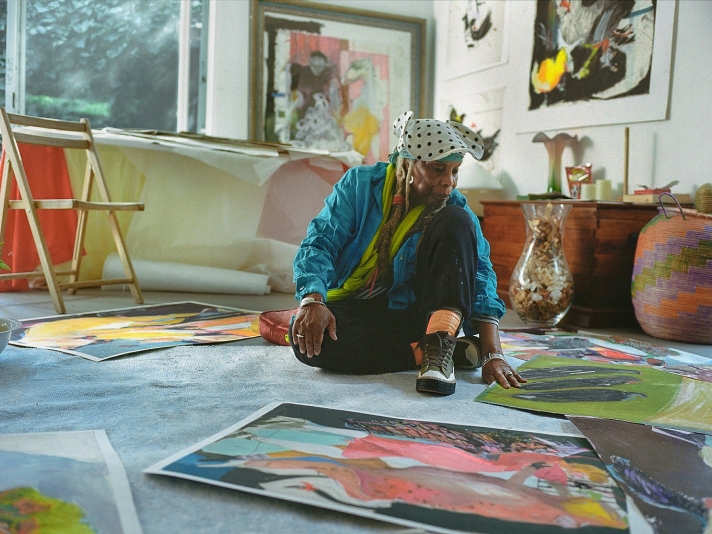 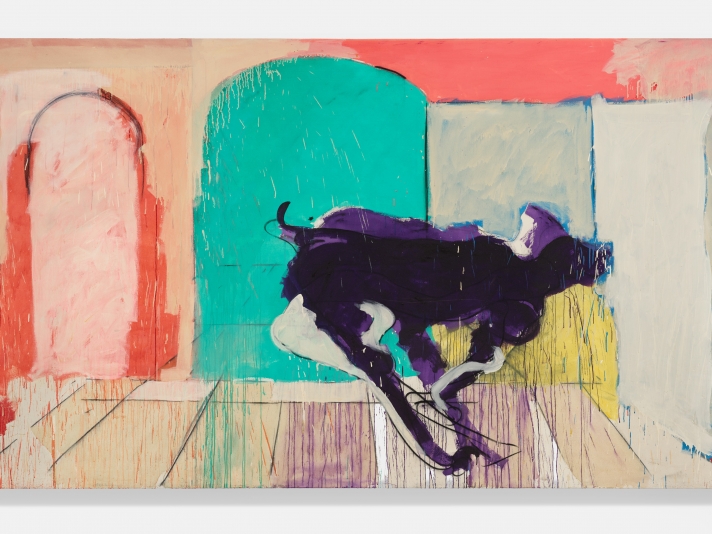 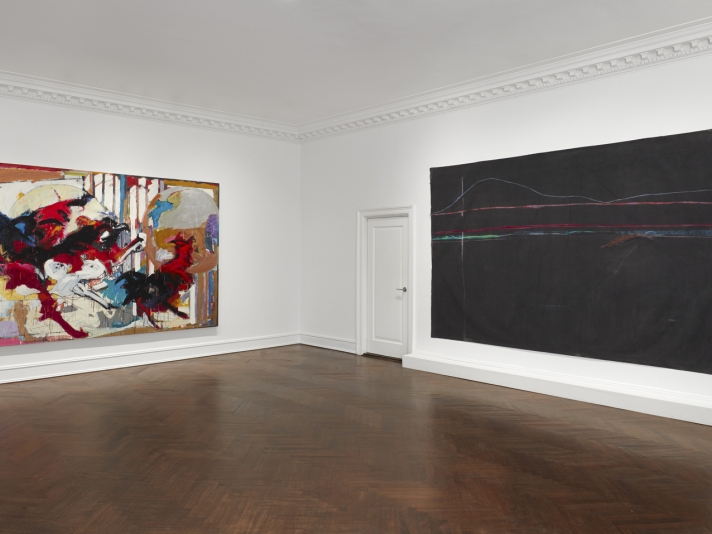 Though the seventy-eight-year-old Mary Lovelace O’Neal’s art and achievements warrant great acclaim, she is, unfortunately, little known. It’s no small wonder: O’Neal is a black woman based on the West Coast. She was not celebrated in the much touted “Soul of a Nation: Art in the Age of Black Power,” which originated at London’s Tate Modern in 2017 and traveled around the world. “Chasing Down the Image,” a mini retrospective covering five decades of her paintings at Mnuchin Gallery—O’Neal’s first show in New York since 1993—aimed to remedy that omission.